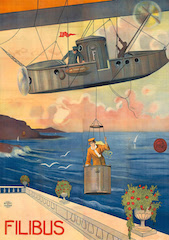 After more than a century, the highly acclaimed 1915 silent thriller Filibus has been fully restored and will be screened at the Eye Filmmuseum in Amsterdam, which is hosting the 10th Women and the Silent Screen Conference this May 25–29. Not only has the museum done a loving restoration of the film but, in the process, they also answered a question that surrounded the movie and added to its success: what was the name of the actress who played Filibus?

“Who is Filibus?” In 1915, ads for the film’s release posed this intriguing question, hinting at the mysterious multiple personas of the main character. But interestingly, the identity of the superb Italian actress who portrayed Filibus was never revealed. Her performances as Filibus, the Baroness Troixmond, and the cross-dressing Count de la Brive were subtle, graceful, brilliant, and decades ahead of her time. She would have become an international star — if the start of World War I a few months after the film’s release had not cut short her career. For the past half-century, the starring role in Filibus has always been credited to the actress Cristina Ruspoli; her remarkably modern performance has been extolled in books and articles.

But doing research at the Eye Filmmuseum during the summer of 2018, intern David Emery made an astounding discovery. After reviewing photos of Ruspoli, he realized with astonishment that she was not the star of the film, but Leonora, the detective’s sister! So, 103 years after the film was released, the original question took on a deeper meaning… Who was Filibus? 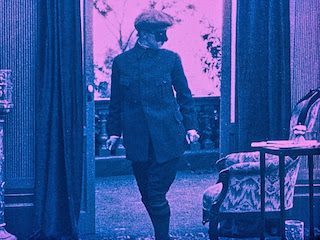 Emery had to become a detective himself to discover her true identity. Luckily, in its vast silent film collection, the Eye Filmmuseum had a number of other films by the Torino-based producer, Corona Films.

Going through the collection, Emery screened an obscure film, Signori Giurati (Gentleman of the Jury), and discovered in the minor role of the young daughter Helene, the actress who had starred in Filibus! Luckily, on the film print, she was credited as Valeria Creti, a little-known actress of her day and Creti's incredible performance can now be celebrated.

Directed by Mario Roncoroni and scripted by future science fiction author Giovanni Bertinetti,  Filibus was recently remastered by the Eye Filmmuseum. A 2K Scan was created from a restored negative, with tinting and toning exactly matched to the original 1915 Desmet tinted-and-toned 35mm nitrate print. Luigi Fiorio was cinematographer.

To bring the film back to its flavor of the period — when the literary characters Fantômas and Arsène Lupin were worldwide sensations — Milestone hired young poet Austin Renna to write new intertitles based on an improved translation by Eye’s archivist Elif Rongen-Kaynakçi. To go with this fantastical film, the Mont Alto Motion Picture Orchestra created and recorded a stunning score.