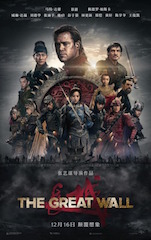 Yimou Zhang, the director of The Great Wall, said, “I’m quite amazed by Dolby’s HDR technology. It is so amazing, recreating all the colors and details with guaranteed brightness. And the wonderful sound quality. Top class!”

“Through our collaboration with Dolby, the last six months have seen growing popularity and success of Dolby Cinema in China, and we are very excited now to reach the milestone of our 10th Dolby Cinema location with the opening of the highly anticipated Wanda Cinema’s Beijing Fengtai Wanda Square site,” said John Zeng, president, Wanda Cinema Line. “Opening Dolby Cinema in China represents our business philosophy which is to prioritize audience value and their movie going experience. We look forward to working with Dolby to extend this better movie going experience to consumers in more cities and provinces in China.”

“As a leader and advocate of the latest cinema technologies, Wanda has been a significant partner in Dolby’s continuous endeavor to transform people’s entertainment experience with our most advanced image and sound technologies, as well as our award-winning cinema design,” said Doug Darrow, senior vice president, cinema business group, Dolby Laboratories. “We are thrilled that Dolby Cinema has become a preferred cinema experience of consumers in China. As we open more Dolby Cinema locations with Wanda, we are committed to transporting more moviegoers in China deeper into the story with the inky blacks, astonishing brightness, stunning contrast, dramatic color, and immersive moving audio they experience at Dolby Cinema.”