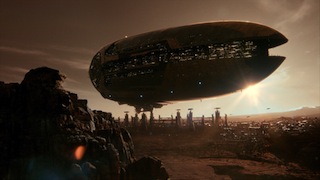 Voyager Pictures, the production company behind Cosmos: A SpaceTime Odyssey has been using Shotgun Software  to keep the 13-episode series’ demanding visual effects deliverables on schedule. Shotgun is the film, TV and game development industries’ trusted platform for production management and review, and as talent moves from visual effects facilities into production companies, many are choosing to bring Shotgun along for the ride.

Addie Manis, VFX producer at Voyager Pictures, said, “Shotgun is so ubiquitous on the vendor side that a lot of us who come out of that world are already comfortable with it. So while it may be unusual to see use of Shotgun initiated on the production side, I convinced our company that it would be an essential component to delivering the very ambitious 1500+ shots we needed to produce in under 10 months. Using Shotgun took human error out of the process to a degree that made everyone involved feel more comfortable.”

Voyager Pictures’ Cosmos: A SpaceTime Odyssey debuted to great success in early March, more than three decades after the debut of Carl Sagan’s original and legendary science documentary series, Cosmos: A SpaceTime Odyssey The follow-up series, airing in the US on Fox and National Geographic Channel, is hosted by astrophysicist Neil deGrasse Tyson and executive produced by Ann Druyan, Sagan’s widow and longtime collaborator, Seth MacFarlane, Mitchell Cannold, and Brannon Braga. Druyan co-wrote the original with Sagan and Steve Soter, who collaborated with her as co-writer on this new series as well.

Shotgun was brought into Cosmos: A SpaceTime Odyssey in December of 2012 during pre-production. To start the project on the right track, previz notes were entered into Shotgun while the episodes were being shaped, as they often parlayed into story and editing notes as well, making Shotgun an all-encompassing tool to track the development of the show itself.

“We love that Shotgun is web-based and not dependent on business hours in a given time zone, or on anyone’s server going down,” said Natasha Francis, also a VFX producer on Cosmos. “Shotgun was the holy grail of where information was tracked on Cosmos—and gave us the confidence that that we could monitor the latest status of any shot in production. Shotgun was like the center of a spoked wheel—allowing us to push different levels of shot information and tasks out, tracked and organized by vendor whenever we needed to.”

There was no in-house development team, TD or pipeline supervisor on staff, so all of the tools used production-side were off-the-shelf. While there were more than 240 artists from 16 different VFX studios working on Cosmos, the primary touch points into Shotgun were by the production team, which included VFX supervisor Rainer Gombos, VFX producers Manis and Francis, along with a small number of in-house production staff, artist and coordinators. Trina Renee, digital production manager, set up a system in which they could categorize every asset by vendor and streamline the notes process using the Shotgun Notes App. This was an essential process as shots often changed hands across four or five vendors from previz to final polish. Status reports were built in Shotgun and exported out to Excel; vendors would submit data-filled Excel spreadsheets feeding straight into the corresponding Shotgun playlist. Shots were uploaded to the production FTP using Joust to manage the transfer, and review sessions were done on Avid and in cineSync.

Effects across the series were complex, involving CG dinosaurs, fire, ancient environments, asteroids, water and much more. “Shotgun’s Notes App was critical to our process; there was no way anyone could have tracked this much volume in any other way,” Manis concluded.

For more information about the show, or to stream the latest episodes, visit http://www.cosmosontv.com.