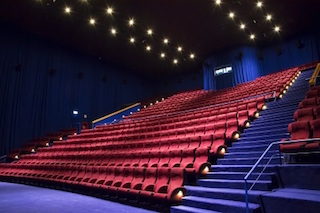 Village Cinemas, one of Argentina’s leading film theater chains, has completed its digitalization with the Christie Solaria Series. In the final phase of its digital roll out, Village Cinemas installed 38 Christie CP2220 projectors, making the majority of Village Cinemas’ 79 screens Christie installations.

With twenty years’ experience in the Argentinian market, Village Cinemas has eight complexes and 79 screens across Argentina. In 1996, Village Cinemas was the first exhibitor to open a multi-screen complex in Argentina, with Village Mendoza, a 10-screen theater with a seating capacity of 2,346.

Village Cinemas’ reputation for being a technology leader differentiates it from its competitors. It is constantly introducing exclusive innovations including theaters with ‘love seats’ (movable armrests), widescreen systems (wall-to-wall screens), full stadium seating that guarantees a complete view of the screen from any location, and monster screen theaters featuring Dolby Atmos™ sound.

“We had already used Christie equipment during the first phase of digitalization of our theaters and the excellent experience at that time proved a decisive factor in choosing the brand again,” said Diego Bachiller, commercial manager at Village Cinemas.

“Christie has made a name for itself on the basis of the quality of its products and for the service it provides in Argentina, which is a deciding factor over other brands,” Bachiller added. “With regard to the Christie CP2220 model we acquired, its performance and brightness are excellent, it is very easy to handle and user-friendly for our operators, as well as being very competitively priced.”

Juan Carlos Chávez, Christie Latin America director said, “We are delighted that such a high-end chain as Village Cinemas has chosen our DLP Cinema projectors from the Christie Solaria Series.”

Likewise, Edgar Navarro, cinema account manager for Christie in Latin America, noted that, “Village Cinemas has always introduced the latest improvements and been at the forefront in offering its audiences innovative cinema technology, so, as you can imagine, we are delighted to be a key player in the technological foundation on which the company is building its plans for the future.”

Village Cinemas also acquired two units of the Christie ACT automated control solution for film theaters. This is a powerful and flexible web-based system providing total control over a theater’s many functions (light dimmers, masking motors, audio levels, projectors, servers, and more) from any device with web access in the network.

In addition, Village Cinemas recently attended a demo of Christie Vive Audio and were delighted with the new cinema sound system. “We tried it out in a theater in Los Angeles and we were really impressed. It’s an excellent product that the audience will definitely appreciate,” said Inés Trementino, the chain’s manager of operations. “Of course, we fully intend to bring this system on board and continue differentiating ourselves through technology, because we know that our audiences perceive and value a cutting-edge cinema experience.”