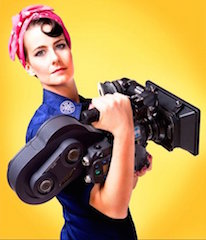 A study released today by the movie industry website Slated dramatically illustrates the cinema industry’s continued across-the-board bias against women. The company’s analysis of 1,591 feature films released theatrically on at least one screen in the U.S. between 2010 and 2015 exposes a systemic lack of trust on the part of the film industry when it comes to collaborating with women in the workplace.

This bias is expressed not just in the lower production budgets that women routinely operate from but, even more crucially, in the number of movie screens on which films by women directors are shown. This lack of theatrical exposure is most startling with films budgeted at under $25 million: Male-directed films in that budget range are shown on three times as many screens on average as those directed by women (646 screens for men versus 242 for women). This imbalance has a direct, adverse effect on those films’ performance — as well as industry perception of female above-the-line talent.

Moreover, after scrutinizing box office performance, Slated found glaring numbers about the extent to which women in all key filmmaking roles are both underutilized and undervalued by the film industry. The often-superior investment returns that women professionals on both sides of the camera generate in the marketplace, as compared with their male counterparts, is simply not matched by the opportunities and resources that they are able to command.

Using data analysis and its own algorithmic scoring systems Slated examined everything from genre choices to script quality in trying to establish where the gender fault-lines might be. Neither of those showed any material difference between men and women. But where there is an alarming schism is in the number of movie screens that showcase films made by women, particularly for lower budget movies.

That data point jumped out and prompted internal discussions at Slated as to how data science can best be harnessed to offset what is evidently a pattern of institutionalized bias at play in the marketplace. When one looks at the returns on investment, it’s clear that women are outperforming men all over the place — so what can we do as an industry to make sure that the production volumes are more comparable?

Among other findings that Slated has identified are:

Women Directors are the most under-represented major category in cinema, accounting for 8.8% of films made in this survey period. They are followed by Women Writers (13.2 percent), Women Producers (19.8 percent) and Women Acting Leads (29.4 percent) Even roles for Supporting Actors, which one might think would be close to fifty-fifty, are tilted towards men.

Regardless of role, women are afforded smaller budgets than their male counterparts. And yet, with the exception of Women Directors, those same women generate higher returns despite deploying those smaller production resources.

Women Writers seem particularly shortchanged: Their scripts achieve the highest ROI of any category and yet their work commands two-thirds of the average budgets given to Male Writers. This imbalance becomes particularly egregious for films budgeted at more than $25 million, a category in which Women Writers achieve an industry-high ROI of 3.72 and yet account for just 8.7 percent of theatrically released screenplays.

Even though male writers generate considerably more theatrical material than women writers, the market potential for their screenplays is essentially the same. The tiny difference in their Slated Script Scores, an industry-weighted measure of a script’s quality that is derived from the year-adjusted performance analysis of 191 screenplays, does not come close to the imbalance in their script production volumes.

In every cinematic genre, far fewer films are directed by women than by men. But if you adjust for that discrepancy, you will see that the volume of films made in each genre by men and women flexes up and down in surprising synchrony. So, too, does the ROI on those genres for both sexes.