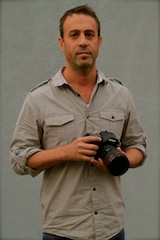 Filmmaker Matt Ogens latest effort is a feature length documentary called Meet the Hitlers. When he selects the right for any of his projects his first thought, though, is how best to tell the story is wants to convey. “It all comes down to telling great stories,” said Ogens. “There are different types of stories, and the nature of the story itself may change how I capture it on film. To decide on that, I collaborate with a director of photography and ask what type of camera he or she thinks is best for each project from a creative perspective, but sometimes the reality of a budget may also dictate what cameras are available to me. We will discuss the look I want for the story and then the DP and I will choose the camera.”

Ogens’ recent assignments shot on Canon equipment include two shorts for Stand Up To Cancer, which aired in prime time to millions of viewers, a commercial for a major automotive brand, and an upcoming feature documentary entitled Meet the Hitlers, which examines the impact that names have on personal identity. The EOS C300 camera was used to shoot one of the shorts, as well as the automotive commercial, while the feature documentary used the EOS C300, the EOS 5D Mark III, as well as EOS 7D cameras. The second short for Stand Up To Cancer was captured using only a 5D Mark III camera.

“You want to use capture equipment that is not complicated,” Ogens explained. “I don’t want to spend too much time dealing with technology; the technology should just work. Although I can’t speak to the technical aspects of various cameras, I can say that – for me – the Canon cameras satisfy my requirements and they also just have the cinematic and filmic look I like.”

Ogens can, however, speak to the operational advantages of particular cameras in terms of his needs as a director. “The camera must serve the story and not take away from it,” he noted. “We filmed part of the car campaign in a manufacturing plant. We had to shoot in tight spaces, so we needed a camera that wasn’t big and cumbersome. We also couldn’t bring in a lot of people or a big array of lighting equipment. We needed a camera that was flexible with lighting and that would work well with the illumination already in the plant. The Canon EOS C300 camera was a perfect fit.”

With a camera body weighing just over 3 lbs., the Canon EOS C300 camera can accommodate virtually any shooting setup. It can be hand-held by using its removable, rotating side hand grip, or its detachable top handle, or used with a wide variety of third-party support devices.

“I love the Canon EOS C300 camera,” Ogens elaborated. “I think it’s a great camera, especially for its price range. I like the look of the EOS C300 camera, it’s great with low light, and it’s very flexible in different lighting conditions. I like how the slow-motion works almost like a film camera in that it’s done in-camera and you don’t have to slow it down in post. The EOS C300 camera is also compatible with a lot of different lenses.”

“Lens choice depends on the project,” Ogens added. “I have used Canon EF prime and zoom lenses, and pretty much every other kind of Canon lens, and I think they’re all great. I own a couple that I use on my personal Canon EOS 7D camera.

Shooting in hospitals, homes, and on inner-city streets, the high mobility of the Canon EOS C300 cinema camera and the EOS 5D Mark III and EOS 7D Digital HD SLR cameras also proved essential for Ogens’ two Stand Up to Cancer shorts and his Meet The Hitlers documentary.

“We shot in hospitals, homes, and all kinds of situations,” he said. “We reported on a retired police officer in Baltimore and filmed some of the old neighborhoods where he worked, K9 dogs, and the inside of police stations. It was essential to keep a low profile in all of those environments, and the compact design of these Canon cameras was great for that. The EOS C300, EOS 5D Mark III, and EOS 7D cameras are also user-friendly, so you can use a much smaller crew and not have a big footprint. For the most part, we used natural light, except for interview setups.”

Ogens shot interviews in Germany, Ecuador, and the U.S. for Meet The Hitlers, and found that the still-photography “look” of the EOS 5D Mark III and EOS 7D Digital SLR camera bodies helped make his subjects more comfortable as he filmed HD interviews with them.

Ogens was also involved in the edit bay and the color-correction post-production sessions for his projects. “I can tell you that there were no post issues with these Canon cameras,” he said. “It was a smooth process. My DP shot in Canon Log with the EOS C300 camera, so there was plenty of room to adjust the visuals in post. Canon seems like it’s really connecting with filmmakers in terms of its outreach,” he observed. “I see a consistency with Canon and I really like what they’re doing.”