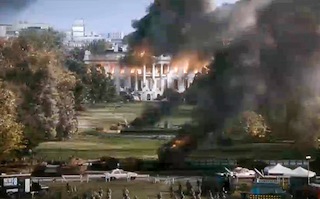 White House Down co-producers Marc Weigert and Volker Engel set up their management platform Uncharted Territory in 1999 to serve as the production and visual effects hub on films they’ve been involved with including 2012, Anonymous and others. Due to the very tight, 12-month delivery schedule for White House Down, Weigert and Engel, who also served as co-VFX supervisors on the film, recruited ten visual effects vendors around the world—all using Shotgun software to push and pull shots.

“Most of the vendors were already using Shotgun internally, so we decided to use it to connect all the studios together into a single, cohesive multi-company pipeline. Shotgun provided us and the effects houses with a clear, organized system to find whatever assets were needed, and for artists, supervisors and our VFX producer, Julia Frey, to stay totally up-to-date with the latest iterations, notes and approval status on any given shot,” said Weigert.

“We knew that managing a multi-vendor pipeline of this magnitude would require a very meticulous pipeline to keep supervisors and artists updated and the overall project on schedule and budget. Shotgun sat at the heart of that pipeline and was essential for making this show work,” explained Weigert.

From the outset, Shotgun was used to help manage a centralized hub that held all essential assets for the film including information from the data wranglers on set to actual dailies and final DPX files. On a typical film project, the process of handing off shots and assets to vendors is incredibly time-consuming and requires a lot of manual file preparation. Using a Shotgun-managed asset hub, Weigert and team were able to assign different permission levels and access to certain files depending on which vendor needed them. Effects houses could then plug into Shotgun to pull out whatever they needed directly from there via an Aspera connection and secure ftp. This process also enabled immediate turnover of new shot edits as they were put online, as well as the transfer of any reference images to accompany director or supervisor ‘look’ guidelines. While Shotgun delivers a very robust toolset out of the box, the included pipeline toolkit makes it easy to build custom tailored tools as well.

“The Shotgun pipeline we adopted for White House Down worked incredibly well, and we anticipate applying it for all of our films,” continued Weigert. “I have been advocating for some time that building more standardization into the VFX process will be one step towards making this industry more sustainable. To that end, we will be sharing some of the custom tools that we built on the Shotgun platform for management of White House Down with all filmmakers in the hope that this could serve as a model for the future of VFX productions, which will surely continue to involve multi-vendor, geographically distributed teams.”

“We’re starting to invest more into helping studios collaborate to develop multi-studio, script to screen pipelines, and we’re excited to see that deployed as a proof-of-concept on White House Down,” said Don Parker, CEO and co-founder, Shotgun Software. “We are building sets of tools with and for Shotgun customers that will allow other studios to follow a similar production methodology and model that worked so well on this film. Almost all of our 400-plus customers in film and animation are using Shotgun to collaborate with outside partners, and we’re pleased that our tools are being used at the front and back end of productions to make that process more efficient.”

Weigert plans to deploy this project management pipeline on his upcoming project, another collaboration with director Roland Emmerich, ID Forever Part I, and is building new customizations into Shotgun to further streamline the budget and financial end of their pipeline.

“Every visual effects vendor has their own format for bidding sheets, and so on the production side, what you end up with are collections of Excel spreadsheets, and a mix of data that is very difficult to cross reference,” said Weigert. “What we built into Shotgun recently is a bidding sheet that will give vendors fields in which to enter bid data, with pull down menus that will allow for a much simpler way to manage that material and save time on both the front and back end of the process.”

White House Down opened nationwide in theatres on June 28. Directed by Roland Emmerich and starring Channing Tatum and Jamie Foxx, the film is an action-thriller about an assault on the White House by a paramilitary group.