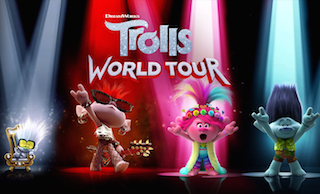 The International Union of Cinemas (UNIC), the body representing European cinema trade associations and operators, today issued a statement condemning Universal Studios' reported decision to stream movies the same day they are released to theatres. Here is the UNIC statement:

“The performance of Trolls Word Tour should be viewed – and only viewed – in the context of the exceptional circumstances surrounding its release and the unprecedented times we are living through. When a third of the global population is currently on some form of a Coronavirus lockdown and only four per cent of cinema screens around the world are open, it is hardly surprising that many have turned to video on demand and similar other services.

“The results for this title also undoubtedly owe a great deal to its marketing as – what was then planned to be – a theatrical release. The sequel was also one of the very few children's films to hit the market at this time, making it – even at a premium price – appealing to many families confined indoors.

“This combination of unusual circumstances should not be used as a reference to redesign a longstanding and proven release business model, which remains crucial in ensuring the ongoing availability of films to the benefit of audiences. Those who will depend on the success of the film industry should refrain from hastily altering key practices for short-term gains and should instead commit to create the best conditions for the whole sector to recover as soon as possible.

“Everyone has had to make adjustments in their daily lives and this includes film fans. This should, however, not be seen as a sign of changing preferences from an audience standpoint – it is after all worth recalling that 2019 was a record-breaking year for cinemas worldwide.

“We remain confident that when audiences are able safely to return to their local cinema, they will soon rediscover the unforgettable, immersive experience that only the Big Screen can deliver and that cinemas will continue to play the role they always have as the most popular and affordable form of entertainment available outside the home.”

The UNIC statement follows a letter from AMC CEO Adam Aron to Universal chairman Donna Langley on Tuesday and released to the public that said, "Effectively immediately AMC will no longer play any Universal movies in any of our theatres in the United States, Europe or the Middle East."

Aron added that the policy is "not some hollow or ill-considered threat" and said that his company isn't trying to punish Universal specifically, but will apply the ban to "any movie maker who unilaterally abandons current windowing practices absent good faith negotiations between us, so that they as distributor and we as exhibitor both benefit and neither are hurt from such changes."

Aron’s letter was in response to an interview NBCUniversal CEO Jeff Shell gave to the Wall Street Journal in which he seemed to suggest that Universal would release all movies online the day they are released in theatres. In his letter Aron said the movie giant accepted Universal's decision to release Trolls digitally as an "exception" in "unprecedented times." But he said Shell's remarks about releasing movies on "both formats" as theatres reopen represented a "radical change" to the business model that "represents nothing but downside for us and is categorically unacceptable" to AMC.

Universal said in response to the AMC letter that the company’s goal in releasing Trolls: World Tour on demand was to deliver entertainment to people who are sheltering at home, while movie theatres and other forms of outside entertainment are unavailable. The company said further that it expects to release films directly to theatres in future, as well as on-demand "when that distribution outlet makes sense."

Universal said it looked forward to having "additional private conversations with our exhibition partners."