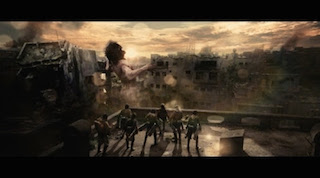 Tickets for the Attack on Titan live action movies are now available for purchase via the official movie website AttackOnTitanTheMovie.com, Funimation announced.The new, two-part feature film is a limited theatrical release and will screen in nearly 300 theaters across the United States and Canada.

"The day Attack on Titan fans across North America have been waiting for has finally arrived. This is a limited theatrical release so I encourage fans to find their nearest theater and purchase tickets to both movies now," said Gen Fukunaga, CEO and founder of Funimation. "A movie as colossal as Attack on Titan truly takes two parts to tell. Fans do not want to miss this opportunity."

The Attack on Titan live action movies are based on the popular manga series of the same name (Shingeki no Kyojin in Japanese), which tells the story of a world where most of humanity has been destroyed by giants and where the last of mankind fights to survive behind three concentric walls – walls that were once impenetrable to the giants. With more than 50 million copies in print today, Attack on Titan has also inspired four spin-off manga as well as a 25-episode anime series, which Funimation both simulcast and released on home video in North America.

"We wanted to make sure that we could bring Attack on Titan to as many fans as possible and we've put together a great network of theatrical partners to do just that," said Mike DuBoise, COO of Funimation. "That said, we know Attack on Titan will draw in people new to anime as well as fans of other genres like horror and sci-fi. This movie will not disappoint."

As part of the ticket sales launch, the new version of the official movie website will go live that includes a theater locator, additional movie info and cast posters, the theatrical trailers as well as extras including photo galleries from the movie, the world premiere in July and fan fun.

For more information on the Attack on Titan live action movies, to locate theaters or to purchase tickets, please visit www.AttackOnTitanTheMovie.com. Tickets are limited.