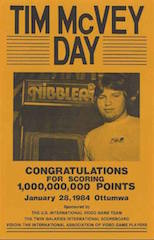 If you grew up in the ‘80s it’s likely that at one time or another you found yourself inside a video arcade playing video games for hours on end at just 25 cents a pop. It was during this time period that a farm boy named Tim McVey from Ottumwa, Iowa—the Dodge City of video games— became the champion of Nibbler, the first arcade game with a scoring threshold of one billion points. It took McVey more than forty hours—and only cost him one quarter—to hit this milestone.

He then went on to become the first video game player in history to have a civic day named in his honor (Tim McVey Day), receiving his very own copy of Nibbler courtesy of Rock-Ola Manufacturing Company.

Twenty-five years later, Andrew Seklir and Tim Kinzy were working long and hard hours as editors on Battlestar Galactica for the SyFy Channel. Raised in the ‘80s, both loved playing classic arcade games, but had never heard of the classic video game Nibbler. To offset the long hours in the editing bay, Seklir installed a hand-built multi-arcade game cabinet in the break room. During their down time, the duo would battle it out on all sorts of classic arcade games, stumbling across Nibbler in the process. After looking online for tips about the game, they encountered the Tim McVey Day One-Billion-Point Poster from 1984 and decided to pursue McVey for an interview.

McVey told them that eight months after he was crowned world champion in 1984, an Italian named Enrico Zanetti was rumored to have broken his record. Now McVey was on a quest to surpass this record 25 years later and achieve video game immortality once again. Seklir and Kinzy decided this would be a great story to tell and set off for Iowa to begin production on the documentary film Man vs Snake: The Long and Twisted Tale Of Nibbler.

Five years in the making, Man vs Snake was shot using a variety of cameras, including HDV, P2, Canon, GoPro, and various SD formats. Additional archival materials, stock footage, photo stills, graphics and titles also needed to be seamlessly incorporated into the film. The mixed frame rates led to problems during color correction when Da Vinci Resolve introduced artifacts during the renders.

AlphaDogs editor and colorist, Sean Stack solved the problem by splitting the media out into separate 720p and 1080i Resolve projects, and then reintegrating the color renders into the master 1080i Avid project. “We were concerned about getting everything uploaded into DaVinci Resolve for color correction, but we pulled it off,” said Seklir. “I really felt that Sean Stack, our online editor and colorist at AlphaDogs really cared about the film. He treated it as his own and was extremely detail oriented. We learned a lot and pushed the limits of our technical chops on this project.” 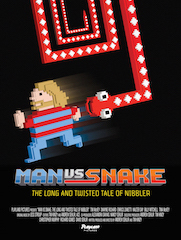 Seklir chose AlphaDogs to complete the finish for Man vs Snake based on their extensive experience in working with the technical challenges that come with making documentary films. “I felt that we would get a lot of hands on attention and guidance, which we did, and they were able to work within our budget requirements,” said Seklir.

Seklir and Kinzy hope that audiences will enjoy looking back at the arcade culture of 1980s, where today’s worldwide multi-billion gaming industry got its start. Seklir comments, “As editors, we kept the pace, energy and flow of the film at a good cruising speed. The film is truly a good ride, with a terrific soundtrack and almost five minutes of animation.” Stack adds “I made an immediate connection with this project, even though I’m not a huge gamer. Any documentary that includes an Alan Parson’s project track in the music score has me on board all the way.”

Man vs Snake is produced and directed by Andrew Seklir and Tim Kinzy. The film will premiere September 27 at Fantastic Fest in Austin, Texas.