Through a Different Prism 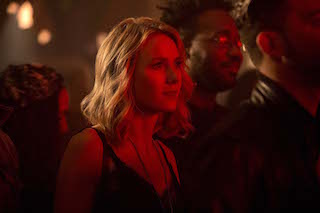 Director of photography Bobby Bukowski (When We Rise, Weeds, The Messenger, Arlington Road) has completed production of the upcoming Netflix series Gypsy, starring Naomi Watts and Billy Crudup. Bukowski shot the 10-episode dramatic series with Panasonic VariCam 35 4K camera recorders. “The greatest gift of the VariCam is the impetus to drop old habits, reinvent techniques and redefine who you are as an artist,” said Bukowski. “It’s wonderful and exciting to look at your craft through a different prism.”

With Netflix requesting 4K RAW acquisition, Bukowski approached Oliver and Erik Schietinger, principals of TCS, New York. After hearing from him about the shooting style and look he was pursuing, they recommended the VariCam 35 for the shoot and ultimately supported the production with the rental of two VariCam 35s outfitted with Codex high-speed 4K uncompressed RAW recorders.

“DPs we’ve worked with have been impressed with the VariCam 35, especially its ISO 5000, which sounded ideal for Gypsy: Bobby told us he wanted to light softly, using ambient light, without the use of direct light,” Oliver Schietinger said. “The VariCam opens new possibilities in low-light circumstances, and essentially puts ‘two film stocks in one camera’ at the disposal of the cinematographer.” 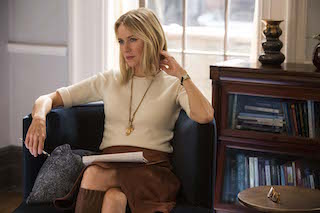 Bukowski said he conducted a long test of the VariCam 35, trying out the dual 800/5000 ISOs in interior/exterior, in daylight and available light. He then took footage to a digital intermediate suite to evaluate color grading. “I was pretty astounded at the ISO 5000 performance—there was not nearly as much noise as I’d anticipated,” he said, “and what noise existed was quite pleasant, beautifully random, as with an analog film grain.”

“Beyond light handling, I found the camera’s color space quite pleasing,” Bukowski added.

Gypsy was in production from last September through February 2017, with much of the psychological drama being shot in built and practical interiors representing the therapist’s home, office and beyond. A much smaller portion of the footage was shot in day and night exteriors. The two VariCam 35s, with Cooke S5/i prime lenses, were largely utilized in studio mode, with Bukowski able to take advantage of the camera’s relatively small body for Steadicam and handheld work.

The DP said he predominantly shot at ISOs 800 and 1250, but would occasionally open to ISO 5000 to “exploit existing light.” He also used ISO 5000 when lighting talent. “Obviously, we wanted our star to look soft and beautiful, and we were never lighting directly,” Bukowski said. “I would often shoot at ISO 5000 and bounce light multiple times, off one white card then to another, then directing through a diffusion frame. I can’t imagine working that way with another camera; it essentially changed the way I light.”

Gypsy was posted at Harbor Picture Company, New York under the supervision of colorist Joe Gawler.

In the series Watts portrays Jean Holloway, a psychotherapist who begins to develop dangerous, intimate relationships with the people in her patients’ lives; Crudup plays her husband. All 10 episodes will be released by Netflix on June 30.