They’re Not Playing NICE in Canada 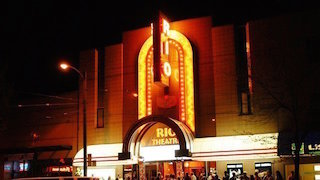 The Network of Independent Canadian Exhibitors has submitted evidence to the nation’s Competition Bureau regarding their access to films in Canada. Across the country, independent cinemas are coming together to decry prohibitive practices, which the association sees as unfairly blocking audiences from the choice of where to see a movie. They single out Cineplex for the blame.

The action by NICE is in support of a petition by Vancouver’s Rio Theatre, ‘Stop Cineplex From Crushing Indie Theatres,’ which has already gathered more than 17,000 signatures.

The Rio claims that Cineplex has an informal and unlawful arrangement with film distributors that will not allow films to be booked with any competing theatres until Cineplex is done screening the film. If a distributor tries to book a film with an indie theatre anywhere near a Cineplex location, the Rio alleges, the cinema giant will simply threaten to pull all of their screenings of that particular film in the area. This leaves distributors no choice but to shut out the smaller independent theatres that simply cannot compete under these unfair terms. The Rio says it often has to wait three-six months after a film has been released before it has been able to book a film.

NICE cites several statistics in support of the Rio’s claims.

The association says this behavior by Cineplex is in direct opposition to Articles 78 and 79 of the Competition Act. Under the Abuse of Dominant Position, the Act reads: “Requiring or inducing a supplier to sell only or primarily to certain customers or to refrain from selling to a competitor with the object of preventing the competitors entry into or expansion in a market.”

NICE is submitting evidence of what they see as Cineplex’s undue influence on non-Cineplex cinemas’ ability to book films.

Currently, UK cinema chain Cineworld is finalizing its acquisition of Cineplex, which is part of the explanation for the timing of this action. If the Cineplex acquisition goes through as-is, 87 percent of dollars made at theatrical box office will be going to non-Canadian companies: Cineplex owned by a UK company, and Landmark Cinemas owned by a Belgian company.

In addition to submitting to the Competition Bureau, NICE is also submitting evidence and letters to Simon Kennedy, Director of Investments at Innovation, Science and Economic Development Canada. NICE has also appealed to the Ministry of Heritage who oversees Investment Act Canada, and assesses takeovers to ensure they are of net benefit for Canadians.

A Cineworld spokesman declined commenting for this article citing the fact that the acquisition hasn’t been finalized.

Digital Cinema Report made several attempts to reach a Cineplex spokesman but got no response.