Technicolor PostWorks Recreates ‘80s Yonkers for Show Me a Hero 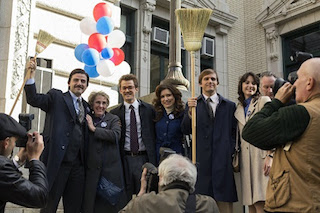 From David Simon, whose previous work with HBO includes the acclaimed series Treme and The Wire, and directed by Paul Haggis, Show Me a Hero is set in 1980s Yonkers, New York and centers on conflicts among elected officials, bureaucrats and citizens over federal court ordered construction of low income housing. It stars Oscar Isaac, Winona Ryder, Jim Belushi, Catherine Keener, Alfred Molina, LaTanya Richardson-Jackson and Bob Balaban, among many others.

The challenge for Technicolor PostWorks was to deliver six hours of feature-quality material under tight time constraints. Simon’s insistence on realism and absolute fidelity to the series’ time period also set a high bar.

Senior colorist Sam Daley performed both dailies and final color grading. During pre-production, Daley worked with cinematographer Andrij Parekh in preparing color LUTs as an aid in setting looks on the set. “We set two LUTs, one that was colder for bureaucratic settings and one that was warmer for human interest aspects of the show,” Daley recalls. “Andrij had a distinct style in mind and he stuck to it. He was very consistent between what he had pre-visualized and what he shot.”

Daley applied color looks to each day’s camera media using a Colorfront system. Going beyond what is normal at the dailies stage, Daley performed detailed grading on a scene-by-scene basis in order to set looks that were near to final. His aim was to provide the editorial team with imagery in close to finished form, and to make final grading more efficient.

“The Colorfront system allowed me to set ASC CDL values that I could carry over to the final grade,” he explains. “Most of the color correction was done with primary grades. During final grading, I used Resolve mainly for global adjustments within scenes, saturation adjustments, beauty work and tracking.”

Once production was complete, the series went through weeks of editorial (Jo Francis and Kate Sanford were the editors) then returned to Technicolor PostWorks for editorial conforming and final grading. Conform editor Ryan McMahon notes that his team took the unusual step of ingesting all of the original camera media onto hard drives attached locally to an Avid Symphony.

“We did our conform by pointing at the local drives and then exported conformed sequences to a central SAN for grading,” he says. “Working directly from drives was tremendously efficient; we were able to finish the work in two or three hours per episode.” McMahon and his team also applied a wide range of editorial visual effects, often to remove artifacts in backgrounds that didn’t adhere to the story’s time period. 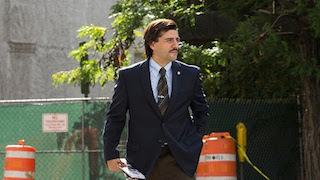 Final grading sessions with Daley were conducted under the supervision of Haggis, Parekh and producer Nina Kostroff Noble. Daley notes that the ultimate look of the series was influenced by the work of artists Giorgio de Chirico and Tamara deLempicka and classic films such as The Conformist, The Insider, The Yards and The Assassination of Richard Nixon.

“It’s a high contrast look,” he says. “There is a lot of backlight built into the photography with desaturation added on my end. We often toned down the background colors to make the characters stand out.”

Having used Colorfront, with its limited set of color tools, proved an advantage in arriving at an authentic period look. “It does not appear to be a modern digital correction where windows, keys and other tricks are used to create a highly polished look,” says Daley. “This was a very aggressive grade that was based on a toolset similar to what was available at the time.”

Authenticity was also an important theme during sound mixing. Re-recording mixer Andy Kris notes that in building the series’ soundtrack every element was scrutinized for accuracy. “Yonkers in the 1980s had a very specific flavor,” Kris says. “People’s accents had a distinct period feel and regional feel and we had to keep track of all of that. David [Simon] is very tuned into those things and has an incredible attention to detail.”

The series’ many scenes of Yonkers city council meetings were especially challenging to mix, involving crowds that grow in size and intensity as the drama progresses. The final soundtrack mixes production elements with crowd voices recorded in post-production ADR and Loop Group sessions. “We layered and layered tracks,” Kris says. “Getting the crowds to sound big, organic and real—while allowing dialogue to be heard—all at the same time, was a challenge. There was a lot going on.”

Kris, who also mixed Treme and The Wire, says that the rapport he and his team have developed with Simon made it easier to find the right aesthetic balance. “Yonkers is not the New Orleans of Treme or the Baltimore of The Wire,” Kris says. “But we were able to take a lot of what we learned while working with David on those shows and reapply them to a new show that’s different, yet the same in many ways. Doing that successfully gave a great sense of accomplishment for our whole team.”