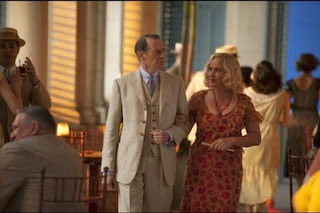 Post-production finishing for the fifth and final season of Boardwalk Empire was completed last fall at Technicolor PostWorks New York. The HBO series, set in Atlantic City during the Prohibition Era, was one of the most acclaimed television dramas of the past decade, earning a total of 18 Emmy Awards over the course of its run, among many other accolades.

Its latest honor came at the recent American Society of Cinematographers Awards where cinematographer Jonathan Freeman ASC won for Outstanding Achievement in Cinematography in a Regular Series, his third ASC Award for the series alongside two Emmys.

Freeman’s award came for the Season Five premiere, Golden Days for Boys and Girls. The episode centers on a visit to Cuba by the show’s protagonist Enoch Nucky Thompson (Steve Buscemi) and includes flashbacks to Nucky’s childhood in New Jersey. Final color grading for the episode was completed at Technicolor PostWorks by colorist John Crowley (who colored the entire fifth season) on Baselight working under the direction of Freeman and director Timothy Van Patten.

“There are so many moods to the show,” recalls Crowley. “My role was to enhance Jonathan’s cinematic vision, to work with what was there and enhance the moods.”

Boardwalk Empire’s cinematic look is due, in part, to the fact that the show was shot on 35mm film, one of the last television series to do so. Freeman notes that Martin Scorsese, who directed the 2010 pilot, chose to shoot 35mm (the cinematographer for the pilot was Stuart Dryburgh), and that film became a key part of the show’s aesthetic. “With the pilot shot on film, we wanted to continue to shoot on film,” Freeman recalls. “It was a big commitment for HBO and for us. The texture of film is impossible to recreate digitally, so the opportunity to shoot film was a true blessing. I can’t thank HBO enough for allowing us to do that.”

Freeman adds that the show originally drew visual inspiration from the Ashcan School, a group of artists based in New York during the early years of the 20th century who portrayed scenes of daily life in the city’s poor neighborhoods. “They were striking in their use of light, contrast and light sources,” he says. “It was very inspiring and a logical tie in to what we saw in the pilot. That became our template. Eventually, as the show became darker—Nucky’s descent into the world of crime—we created more darkness, more contrast, more moodiness, more half lighting, to evolve the tone of the series.” 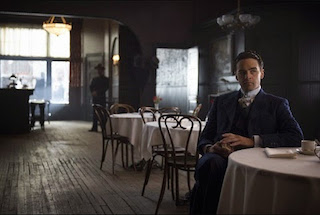 The first episode of the fifth season introduced flashbacks as a recurring narrative device. Freeman says that those flashbacks were handled with considerable care. “We chose to treat the flashbacks subtly but distinctly for the first few episodes,” he explains. “We wanted the audience to feel a shift, but we didn’t want to go so far that it became obvious. If we had chosen to go extreme, we would have lost some impact in terms of transition. That said, we wanted to have a slightly different feeling so that the audience would get used to it and know where they are. It was a delicate balance.”

One of the first flashback scenes shows a young Nucky diving for coins off an Atlantic City pier. He isn’t as fast as the other boys and is later punished by his father for coming home empty handed. “The flashbacks had a very specific look,” notes Crowley. “It was desaturated, monochromatic. The scenes with Nucky as an adult in Havana, by contrast, are warm, golden and inviting. Mixing those two color palettes was really interesting.”

Freeman and Crowley also used color adjustments to guide the viewer’s attention. “Baselight offers an extensive toolset that is very powerful,” says Crowley. “We used shapes to modify skin tones, create various vignettes, isolate highlights on faces and drop off backgrounds. We wanted to focus on the characters and give more dimension to the frame. We used vignettes in certain places, especially wide shots, to shape the frame and draw attention to the characters.”

Crowley points to a scene in a restaurant where Lucky Luciano (Vincent Piazza) assassinates Joe Masseria (Ivo Nandi). “In the background you see detail, but we make it fall off a bit, so your eye is drawn to the middle of the frame,” he recalls. “I love the way Jonathan lit it, from the highlights on the faces, to the way the background drops off. There is a lot of dimension to it. It’s one of my favorite scenes.”

Freeman says that Crowley quickly grasped the general aesthetic he was aiming for and that gave them more time to work on nuances. “John gets the big picture. By the time you’re working on the next episode he’s already making those big picture adjustments. It takes a talented artist to be able to pick up and run with it. He did that in fine fashion.”

Crowley was equally impressed with Freeman’s work. “He knows what he wants,” Crowley says, “but he listens and will take suggestions from a colorist. He’s a true collaborator. It was an honor to work with him on this project.”