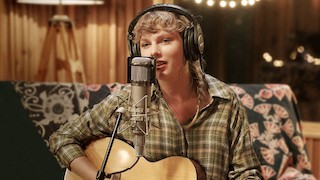 With 2020 having been a highly unusual year for the recording industry, the release of Taylor Swift’s Folklore: The Long Pond Studio Sessions on the Disney+ platform at the end of November provided a welcome, intimate insight into one of the biggest recording stars of our time. A mix between documentary film and live performance, the 106-minute-long movie sees Swift perform all the tracks from her Folklore album live at the secluded Long Pond Studio in upstate New York.

Shooting was a considerable challenge. Not only is the studio a small, intimate space, but COVID-19 restrictions meant that the shoot had to be undertaken with the minimum of people to limit exposure. That led leading East Coast camera systems specialist JitaCam to suggest the use of Motion Impossible’s Agito Trax modular dolly for the four-day shoot.

“There were a couple of reasons why we thought the Agito would be perfect for this,” said JitaCam owner John Pry. “First off, it fits in some really tight spaces and we could build a 30-foot track with straight sections and curved portions right around the mixing desk and enabling us to get really close to the performers. Second, it’s fully wireless, which means that you don’t need an additional person wrangling cables in the room. In fact, we were able to operate it from outside the studio space for the whole shoot.”

Pry shot his scenes using the Agito Trax dolly with the additional Tower and six-inch riser. The system’s ability to carry an impressive 22kg payload on the Tower allowed JitaCam to mount an Alexa Mini LF carrying a heavyweight Angenieux Ultra Optimo 26-320mm lens on a Arri SRH-3 Stabilized Head.

As well as its COVID-compliance, the Agito was also quiet in operation, which was an important aspect given the stripped back nature of the performances in question.

“Generally, all the songs are very mellow, you don’t have drums and guitar taking over the sound space, so we had to operate the Agito as noiselessly as we could,” said Pry. “It’s a powerful unit but it is capable of operating with exactly the sort of quiet operation that we needed to be as unobtrusive as possible and just let Taylor and everyone else do their thing.”

“We are delighted to have been involved in such a high-profile production,” said Motion Impossible CEO/Co-founder, Rob Drewett. “To be able to capture performances of that quality with a system that can not only fit in cramped spaces and be COVID-compliant but work inconspicuously enough to let the artists just play, helps show just how adaptable the Agito is.”