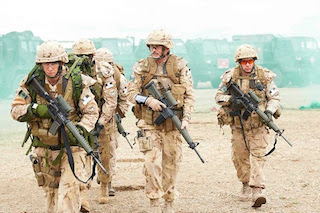 In a significant boost to its services for movie and television sound, Tattersall Sound & Picture has added Dolby Atmos technology to its largest mixing stage and completed its first project in the immersive sound format. Hyena Road, an Afghan war drama from actor/director Paul Gross (Passchendaele) will make its world premiere this month at the Toronto International Film Festival as a Gala Presentation.

Tattersall Sound & Picture provided both sound editorial and mixing services for the film, which centers on Canadian troops facing Taliban attacks while struggling to complete a crucial highway link. In pre-production conversations with Hyena Road producers Rhombus Media, it became clear that the film’s action sequences would benefit from the Atmos format, which uses an array of more than 35 speakers to engulf the audience in an intricate web of sound.

“We looked into adding Atmos for this project and decided it was something that we should do,” said company co-founder and re-recording engineer Lou Solakofski. “Some of the combat scenes in Kandahar City were perfect for Dolby Atmos. It would allow us to place sounds on the ceiling, on sidewalls and back walls. We could make missiles and bullets fly right by your ear.”

Upgrading the company’s largest mixing theater involved several months of research, engineering and installation, and a considerable investment in technology, including 32 new speakers. At the end of the process, Dolby engineers commissioned the studio and gave it official Atmos-certification, making it one of the first Canadian sound rooms to attain that status.

While Atmos technology was being fitted into the mix stage, sound editorial for Hyena Road was proceeding at an intense clip. Supervising sound editor Jane Tattersall and her crew were charged with creating the sound effects for the film’s high adrenaline battle scenes. That involved gathering the sounds of the actual firearms and artillery used by both the Canadian armed forces and Taliban fighters.

The film also makes considerable use of crowd noises. Although the film is set in Afghanistan, it was shot in Jordan with Jordanian Arabs as extras. Their voices had to be replaced with those of native Afghan speakers. “That required finding a lot of people locally who were Afghan natives and spoke the Pashtun dialect,” recalled Solakofski. “We used their voices for crowds of fighters and other people in Kandahar and small villages so that the sound would be authentic to the location.” Foley sessions were recorded at Footsteps, Toronto.

Melding all those sounds on the Atmos mix stage helped to bring the film alive. Solakofski says that the large speaker array creates an opportunity to build soundtracks that are richer, more nuanced and realistic that the 5.1 sound that has been standard for motion pictures for several decades. “As a mixer, you are always looking for a place to put audio in order to add suspense and help involve the audience,” he says. “That was definitely true in this case. It’s a bigger canvas to work with.”

Solakofski believes that audiences will appreciate the difference and that will, in turn, fuel demand for Atmos-certified mixing. “We see it as a great investment,” he concludes. “More films and television shows will adopt this format because the end user will demand it.”