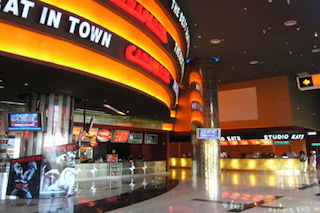 Cinemark Theatres is the first exhibitor in Taiwan to deploy Christie’s CP4325-RGB pure laser cinema projector. The projector, which features Christie’s proprietary RealLaser technology, was installed in  the flagship Cine X auditorium of Cinemark Theatres Dream Mall, equipped with a 19-meter screen and a capacity of over 350 seats. Dacoms Technology had the installation and will oversee maintenance.

“We’re delighted to be the first cinema chain in Taiwan to deploy Christie’s next generation RGB pure laser projector in our Cine X auditorium, which offers the best cinematic experience to our audiences,” said Alan Chen, assistant booth manager, Cinemark-Core Pacific. “Our decision to acquire the CP4325-RGB stems from our belief that this is the most advanced RGB pure laser projector on the market, offering the best visual quality, reliability, and affordability. We are convinced that RGB pure laser is the true replacement for lamp-based illumination and this technology is the future of cinema projection.”

Emily Hong, president, Dacoms Technology said, “Since the launch of the CP4325-RGB in December 2017, it has received strong interest from cinema exhibitors across Taiwan. Interest that’s accelerated since the showing of Christie’s 2K RealLaser models this Summer and the promise of more new RGB pure laser models from the company later this year. Exhibitors find the ‘all-in-one’ form factor and promise of reduced power consumption very compelling. And having worked closely with Christie for decades, we know that this breakthrough technology will stun audiences with its outstanding visuals that approach Rec. 2020 color space. I’m pleased that Cinemark Theatres has invested in state-of-the-art projection technology that’s able to offer practical and commercial benefits in the years to come.”

Han Kim, senior director, Asia Pacific sales, cinema, Christie, added, “It’s heartening that an increasing number of exhibitors in Asia and around the world have embraced Christie RealLaser, the world’s first laser illumination technology created by Christie, which continues to set the standard for cinema technology innovation. We appreciate that Cinemark Theatres has chosen our CP4325-RGB for its flagship auditorium in Kaohsiung. We look forward to more exhibitors selecting our RealLaser family of projectors for their new cinemas or to replace their lamp-based systems.”