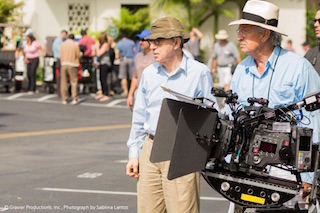 Sony today confirmed that filmmaker Woody Allen has chosen Sony CineAlta for his first ever-digital shoot. For this special project, Allen will be shooting with Sony’s CineAlta F65 camera and the film will be mastered in 4K. The F65 has long been the choice among filmmakers around the world, including critically acclaimed cinematographer Vittorio Storaro, who will be working with Allen on the currently untitled film.

In 1977, the classic film, Annie Hall, won four Academy Awards, including best picture and best director. In 1979, Allen wrote and directed the film Manhattan, which was filmed in widescreen photography. At the time, filming in widescreen was usually reserved for larger action based films.

Storaro, the three-time Academy Award winning cinematographer for Apocalypse Now, Reds and The Last Emperor, is highly regarded as one of the best in the business. Over the last several years, Storaro has dedicated his professional work to digital technologies.

Storaro first began testing with Sony in 1983, and was impressed by the accurate color composition and HD quality of the era’s technology. He credits these tests with the confidence he brought to the set of Apocalypse Now, which ultimately won him the Academy Award. Both Sony and Storaro have come a long way since 1983 – new workflows and imaging techniques have been developed to grant great storytellers the ability to connect with audiences in more impactful ways. 4K is the latest example of this, guaranteeing the most stunning and immersive images available to filmmakers and cinematographers. Allen and Storaro know this well, having chosen to master their new project in 4K.

On his decision to use the F65, Storaro said, “I had seen that the Sony F65 was capable of recording beautiful images in 4K and 16 bit-color depth in 1:2, which is my favorite composition. So when Woody called me this year asking me to be the cinematographer of his new film with the working title WASP 2015, my decision was already made. I convinced him to record the film in digital, so we can begin our journey together in the digital world. It’s time now for the Sony F65.”

“Sony is deeply honored that Woody Allen has chosen Sony CineAlta for his first ever digital shoot”, said Ainara Porron, European marketing manager, cinematography, Sony Europe. “This further demonstrates our commitment to the movie industry and showcases Sony CineAlta as the top choice for directors and cinematographers.

To learn more about the full Sony CineAlta line please visit pro.sony.eu/cinematography and to stay up-to-date on this special project visit www.woodyallen.com.