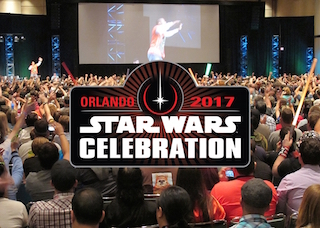 Barco is collaborating with Lucasfilm and ReedPOP on the Star Wars Celebration event, being held in Orlando, Florida at the Orange County Convention Center on April 13-16. During the four day event, devoted Star Wars fans will experience the latest in laser projection technology as they gather at the Galaxy Stage to attend high-profile guest panels, including Mark Hamill, Anthony Daniels, Hayden Christensen and more, and watch a special tribute to 40 years of Star Wars.

Special screenings of full-length films such as Rogue One: A Star Wars Story, Star Wars: Return of the Jedi, and Star Wars: The Empire Strikes Back will also be projected on Barco’s DP4K-17BLP.

Barco’s Smart Laser projection technology offers audiences the ultimate experience in image quality, delivering an exceptional brightness level to ensure that every detail is seen. Installed in the Galaxy Stage, the 17,000 lumen 4K Smart Laser projector will be utilized during each of the 12 panels and 5 screening sessions.

“Knowing the high expectations of our most devoted Star Wars fans, we wanted to deliver an extremely rich, mesmerizing experience,” said Mary Franklin, global event director at ReedPOP. “As soon as we observed the Smart Laser Projector in action, we knew it would exceed our expectations, which Barco has continued to achieve during the past several years and Celebration events.”

“Star Wars is one of the most beloved movie series ever created,” said Stijn Henderickx, vice president cinema at Barco. “It is a great honor to showcase the next wave of Star Wars footage to some of the franchise’s most ardent fans, while introducing them to the latest in movie projection technology from Barco.”