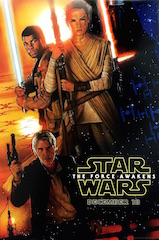 Star Wars: The Force Awakens has put up record-breaking box office numbers for 4DX globally. Only two weeks into its run, the film has been seen by more than one million moviegoers in 4DX, surpassing the success of Jurassic World in 4DX, which previously reached one million moviegoers in three weeks. In America, Asia and Africa, Star Wars has broken records for the highest occupancy rate for a 4DX film.

Nu Metro V&A Waterfront, the first 4DX location to open in Africa, has become one of Cape Town’s biggest draws following the success of Star Wars in 4DX – and of the 228 4DX locations in the world, is notably enjoying an incredible run of the film, with tickets consistently sold out for the first month of show times.

This achievement is further highlighted by the fact that some shows were sold out weeks in advance with customers arriving at the cinema specifically asking to buy tickets for the film in the 4DX format. In Mexico, where there are 28 screens, 4DX's box office revenue takes more than 10 percent of the total box office nationwide generated in Mexico. That percentage is twice as high as Jurrasic World last summer.

Star Wars: The Force Awakens is projected to out-gross Jurassic World, which currently holds the record in box office revenue. As of the end of 2015, 4DX reaches 228 auditoriums in 37 countries, and aims to grow further by opening 200 additional auditoriums in 2016.