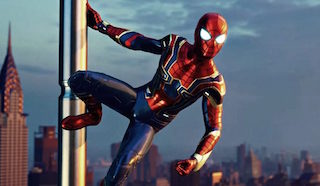 Sony Pictures has announced that Spider-Man: Far From Home will be released in the 270-degree panoramic ScreenX format on July 2nd. It marks the first Sony Pictures film to be converted into ScreenX. Previously Sony Pictures released Spider-Man: Into the Spider-Verse in 4DX, another immersive cinema technology from CJ 4DPlex. The new Spider-Man will also be available in 4DX.

"We are very excited to share Spider-Man: Far From Home with audiences around the world and have them experience the highly anticipated film expanded onto the sidewalls of the ScreenX auditoriums," said CJ 4DPlex CEO JongRyul Kim. "Fans will be blown away by the immersive and visual experience of ScreenX and we look forward to bringing more of these exciting cinematic experiences to audiences in the future with Sony Pictures."

"We couldn't be happier in expanding our partnership with CJ 4DPlex to bring Spider-Man: Far From Home to audiences worldwide in the innovative ScreenX format," said Scott Sherr, Sony Pictures executive vice president, worldwide theatrical distribution. "We're excited to give consumers a choice – an immersive experience that they can only experience in theaters. We trust the capabilities of ScreenX to offer a visual boost to the journey of Spider-Man, and we look forward to entertaining audiences through this unique and exciting cinematic technology."

This year, ScreenX is on track to nearly double the lineup in collaboration with all the major Hollywood studios. As of May 2019, ScreenX is available in 214 auditoriums around the globe, spanning 19 countries, and in 21 auditoriums in the U.S.