The Sounds of Worlds Colliding

When Two Worlds Collide, winner of the World Cinema documentary prize for Best First Feature at this year’s Sundance Film Festival, focuses on the alarming and sad conflict between indigenous people of the Peruvian rainforest and corporations bent on exploiting the region through mining, drilling and clear cutting.

First time directors Heidi Brandenburg Sierralta and Matthew Orzel tell the story of a local leader, forced into exile for resisting the destruction of Amazonian land, and shed light on a crisis that has implications for the entire world.

The film will have its world theatrical premiere at Film Forum in New York City on August 17, released by First Run Features.

Alchemy Post Sound has provided Foley services for dozens of documentaries. It’s work that requires a keen ear and a soft touch, and, if it’s done right, it should pass unnoticed by the audience. “You want the Foley to sit in the mix like natural sound elements,” explains Bloome. “On an action film, Foley is often loud and proud. We recreate every movement the actors make…everything they touch or grab, every footstep. But on a doc, while you still want to bring the scene to life, you want to do it in a way that’s transparent. That’s very difficult.”

For When Two World’s Collide, Bloome’s first step was to review the film with notes provided by the supervising sound editor detailing scenes that needed Foley enhancement. The film includes scenes of public demonstrations and environmentalists working deep in the jungle that were shot quickly under challenging conditions. Production sound was often of poor quality or missing. 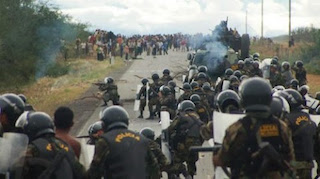 Bloome points to a scene showing police firing tear gas canisters at indigenous protesters. The sounds of the tear gas guns were missing from the production footage so Bloome worked with the film’s sound effects editor to recreate them. “It was obvious that the effects editor should do the actual gun shots, but it wasn’t so clear how to make the sounds of the canisters hitting the ground and rolling,” he recalls. “When the can stops rolling, it spins and so the sound of the spray has a Doppler effect.  There needed to be movement in the spray.”

Both Bloome’s crew and the effects editor created sounds for the spinning tear gas canisters. They were blended together during the mix to produce the final effects.

Although realism is the goal, the actual work of producing natural sound often requires creative imagination. Bloome notes that while he has not visited the Peruvian jungle, he was able to draw from his personal experience in reimagining its rich and exotic soundscape. “I’ve done a lot of hiking and mountain biking, and I’ve been to the rainforest in Mexico,” he observes. “You get a good sense for how things should sound by going through life and listening to your natural environment. I store sounds in my head and use them when I’m recreating something I see in a picture.”

One scene that required special sound treatment shows oil workers traipsing through a shallow riverbed to investigate a leaky pipeline. The oil mixed with river water had turned to the ground into a thick ooze.

“There is a moment when one of the workers is using a stick to poke at the crude oil, which was topped with leaves and other bio matter,” Bloome recalls. “When I look at a scene like that, I use my imagination to break it down into layers of sound. One sound wouldn’t work. It needed layers of leaves and tree branches. The squish of the oil. Then another layer of sweetening with heaviness to make it work. At that point, we’re not just selling the scene, we’re selling the idea of the damage to the rainforest. That’s when our job becomes interesting.”

In the finished soundtrack, Bloome’s sounds of muck sit below the dialogue and narration. Yet they help to subliminally shape the audience’s view of the events and story. “The textures we create help bring those moments into reality,” Bloome says. “Documentaries are reality. They are true stories of what is going on in the human world. To create sounds that fit those stories is amazing…and a lot of fun.”