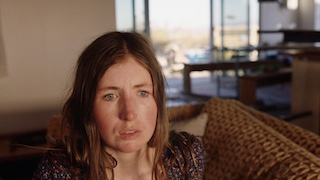 Called “one of the most prescient films of the decade,” She Dies Tomorrow from Neon and writer/director Amy Seimetz, centers on a woman who believes she is about to die from a mysterious illness that is also highly contagious. The psychological thriller, which recently went through sound and picture finishing at Goldcrest Post in New York, delves into universal feelings of anxiety and dread through a story that blends horror, humor, drama and the surreal. Seimetz used sound to convey the feeling of fear.

After waking up convinced that she is going to die tomorrow, Amy’s carefully mended life begins to unravel. As her delusions of certain death become contagious to those around her, Amy and her friends’ lives spiral out of control in a tantalizing descent into madness. 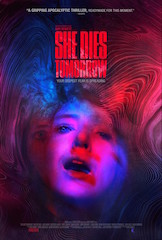 Seimetz, who was referred to Goldcrest Post by director Steven Soderbergh and previously collaborated with the facility on the Starz series The Girlfriend Experience, returned to the facility because of its commitment to independent film, talented sound and pictures artists and ability to deliver a complete post solution. “I worked with Nat and Mary Ellen on the second season of The Girlfriend Experience and we had a great time,” she recalls. “Goldcrest was fully on board with my film and made it work.”

She talked with Porto about the film’s sound needs during pre-production and, especially, how she wanted sound to accentuate certain critical moments when characters struggle with their fate. “When people feel that they are contracting the virus, they begin to shake inside,” Seimetz explains. “It’s a transformative experience and I wanted to express that feeling through sound. I told Mary Ellen, ‘Let’s go all-in, push it as far as we can, and create a sonic experiential moment.’”

Seimetz was intent on using sound design, color and other post-production tools to enhance the story’s unusual mood. Porto says that coming up with the right sound to signal virus transmission was challenging because it needed to suggest that the process was happening, not physically, but emotionally. Eventually, she found what she was looking for in an ethereal bit of production sound. “It started with wind noise from the last scene in the film, which we combined with low bass notes created by the composers, the Mondo Boys,” she recalls. “The scene was shot in the desert and the wind has a low, guttural rumble. We used that to represent Amy’s emotions as they form inside her and migrate to people she meets.”

As the story progresses, infected characters hear sounds and voices in their heads. At first, they are barely perceptible, but they grow louder and more menacing. “Amy knew what she wanted, but she allowed us creative freedom to piece together different bits of voice and sound to create the effect she was after,” recalls Porto, citing a scene where Shiel’s character thinks she hears voices and frantically searches her house for their source. “It’s almost like she’s receiving a radio transmission,” Porto says, “and that’s how we treated it.” 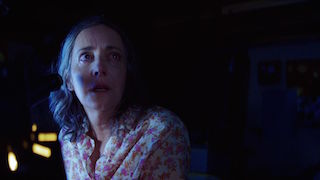 Price completed the haunting effect during the final mix. “Mary Ellen and Amy created a palate of sounds using clips of dialogue,” Price recalls. “I selectively panned and processed each one, using surround slap delay and reverb, creating sonic breadcrumbs that move around the room with the characters following behind. It eventually builds to swirling soundscapes.”

Even normal background ambience takes on special significance. “Diegetic sound is crucial to the way the story walks the line between horror and comedy,” explains Obzud. “One moment, you’re fully engulfed in sci-fi/horror sound design, and then you hear something normal, like a bird or a lawnmower, and it snaps you back to reality.”

The sound design created by Porto and Obzud was augmented by extensive Foley effects created by Chancey (through her company Props and Pits Foley). Footsteps and tactile sounds not only add texture, they help root the story in reality. “There are long sequences where there is no dialogue and so the sound takes on added significance in establishing the environment and advancing the story,” says Chancey. “In one scene, Amy is walking through her home and she touches everything. She then goes outside and runs her hands over leaves, branches and other foliage. All of that is supported by Foley, and a lot of fun to do.”

Color is used to similarly dramatic effect. Jencks worked with Seimetz and cinematographer Jay Keitel to refine the highly unusual looks Keitel captured on set. Shooting with Arri Alexa Mini and Canon C300 Mark II cameras, Keitel employed unusual lensing and filtration to give scenes an unreal appearance that heightens the sense of foreboding. The effect grows more intense as the film progresses. “We initially wanted to convey a feeling of uneasy calm,” Keitel explains. “But as the story grows darker, we shift to a more genre-specific look. We pushed that further in color with Nat by increasing contrast and adding more extreme color references.”

At times, the look borders on the psychedelic, says Jencks. “We went for things that, in most films, would be totally crazy,” he says, “like applying effects on music cues, and shifting colors radically throughout a single shot to match mood swings. There were no limitations. Whenever I asked Amy if it was too much, the answer was always, ‘No.’”

Jencks says that it was handy to have the sound and picture teams working in the same building, noting that he and Porto exchanged work-in-progress elements and collaborated interactively. “I could do something in response to the sound and then send the color to them. The sound team could look at that and respond back,” he says. “If Amy was downstairs in the mix, they could bounce the sound to us, then walk upstairs to take a look. It’s unusual to have sound and picture coordinated so closely.”

Originally scheduled to premiere at SXSW, the theatrical mix was completed in Goldcrest’s Theatre Q, it’s largest mix stage. However, when the coronavirus outbreak erupted and the festival was canceled, Goldcrest had to quickly set up a remote workflow that allowed Price and Obzud to finish a near-field home theatre mix  from their respective home studios, with Porto monitoring the work for a third location. Seimetz and picture editor Kate Brokaw, who were in lockdown in Los Angeles, received updates regularly and communicated with the mix team via remote collaboration technology.

“The room at Goldcrest translated very well to our home environments,” Price says. “By that point we had spent so much time tweaking things on the mix stage with Amy present that creatively we were on the same page. During lockdown, we could all watch the film on our respective monitors and listen in on headphones, and hear all the subtlety. We didn’t miss a beat.”

“It was the smoothest post process I’ve ever experienced,” adds Seimetz. “Even when we were forced to work remotely I was confidant in the result. I knew that I was going to be taken care of because I was working with people I trusted deeply.”