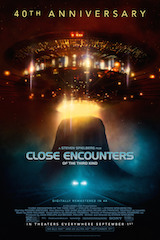 Sony Pictures will celebrate the 40th anniversary of legendary director Steven Spielberg's epic science fiction adventure Close Encounters of the Third Kind with a series of special events. As a highlight of the celebration, the film has been restored and remastered in 4K and will be returning to the big screen in the United States and Canada.

The director's cut will receive an exclusive one-week engagement in theaters across the country starting September 1, as well as a world premiere in the Venezia Classici section of the Venice International Film Festival.

Park Circus will distribute the film in international territories to follow.

"The release of Close Encounters ushered in a new way of approaching science fiction that has influenced countless filmmakers in the decades since," said Adrian Smith, president, domestic distribution for Sony Pictures Releasing. "We couldn't be happier to celebrate its 40th anniversary by introducing it to a new generation of film fans through this special engagement."

Close Encounters of the Third Kind is presented with an all-new 4K restoration. The film was fully restored from the 35mm original camera negative, thereby utilizing in 4K the full resolution, detail and color depth inherent in the film.

After an encounter with U.F.O.s, a line worker feels undeniably drawn to an isolated area in the wilderness where something spectacular is about to happen.

Close Encounters of the Third Kind was produced by Julia Phillips and Michael Phillips. It has a run time of approximately 135 minutes (1977 theatrical version), 132 minutes (1980 special edition), and 137 minutes (1997 director's cut).  The film is rated PG for some intense sci-fi action, mild language and thematic elements.