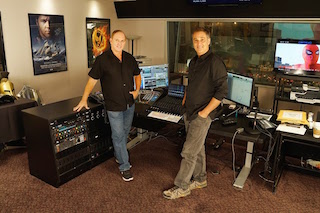 Sony Pictures Post Production Services has completed a major upgrade of its Foley department, adding new, state-of-the-art recording technology to its control room and stage where sound effects for scores of studio features, including the current hit Spider-Man: Homecoming, have been produced.

Key additions include an Avid S6 M40 control surface, the most advanced recording and mixing console available. It is supported by an Avid Pro Tools HDX digital audio workstation and Pueblo microphone preamps, as well as processing gear, plug-ins and playback systems. The control room and stage have also been rewired and fitted with new speakers and microphones.

The upgrade allows Foley artist Gary Hecker and Foley mixer Randy Singer to work more efficiently and perform sophisticated editing and mixing functions. “The films we work on demand the highest quality in sound,” said Hecker. “This new technology ensures our ability to deliver the best performances and recordings for all clients.” Sony Pictures Post Production Services’ Foley department has created sound effects for nearly a dozen films over the past several months, including The Fate of the Furious, Justice League, The Dark Tower, The Emoji Movie and Jumanji.

While adding the new digital recording technology, Sony Pictures engineers were careful to retain the ambience and warmth that has made the studio’s Foley stage popular among sound artists and filmmakers. “It took a lot of finessing to preserve the analog sound of the stage and ensure that its sonic environment was perfectly aligned with the sound in the control room,” said lead engineer Nathan Oishi. “You can use computer models to place speakers, but, occasionally, it comes down to science by human ear.”

Hecker said the improved workspace is already drawing enthusiastic reviews. “Clients have noticed a significant difference; they say the sound is clean and full-bodied,” said Hecker. “It is exciting to raise the bar of quality and provide the best in sound to the filmmakers who work with us at Sony Pictures Post Production Services.”