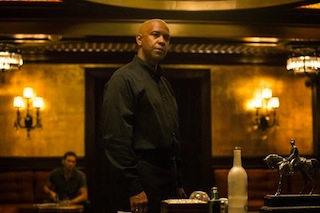 Post-production work for The Equalizer the new thriller from director Antoine Fuqua and Columbia Pictures was completed on the Sony Pictures lot in Culver City, California.

The campus-like environment of the Sony Pictures lot made it convenient for the various post-production departments to collaborate with each other and with Fuqua and his production team. The Sony Pictures Production Backbone, a high-speed media storage and networking environment, simplified the sharing of production elements.

“The lot is a wonderful environment for filmmakers because all of the post production departments are located within a few steps of each other,” observes Randy Lake, executive vice president and general manager, Digital Production Services at Sony Pictures Digital Productions. “The picture editors, sound editors and finishing artists are in daily contact and can share ideas and works-in-progress. It’s great for creative collaboration.”

Winter and Esparza, reprising their roles from Fuqua’s previous film Olympus Has Fallen, recreated many of the sound environments of Boston, where the film is set, including its iconic mass transit system. They also created more abstract treatments to represent the internal thought processes of the Robert McCall, the film’s hero played by Denzell Washington. “Denzell’s McCall has a unique character trait,” Esparza explains. “He is a very analytical person whose perception of time slows down.”

Leahy and Pederson, who previously mixed Fuqua’s films Training Day and Tears of the Sun, mixed soundtrack for The Equalizer in Sony Pictures Post Production’s historic Cary Grant Theatre. It was the first Columbia Pictures release to be mixed in Dolby 7.1 surround sound. “That was great,” says Leahy. “It allowed us to be more specific in the surrounds and give the soundtrack an added dimension.”

“When we got to the Cary Grant, from the console to the screen, we felt very comfortable,” adds Pederson. “It’s a big room.”

Editorial finishing and color grading proceeded at Colorworks in tandem with final sound work. Delaney worked alongside Fuqua and cinematographer Mauro Fiore to refine the film’s final look. He also worked with a variety of off-lot visual effects vendors to grade and integrate visual effects scenes and elements.

Delaney was especially pleased with the look of the film’s climactic scene, set late at night in a closed home improvement store. “Everything happens at the edge of darkness,” he says. “The challenge was to ensure that the audience can see what is happening, without it feeling lit. It was a delicate balance.”

The sound and picture teams benefitted not only from being in close proximity to each other, but also from sharing a common infrastructure. Sound and picture files, along with associated metadata, were all stored on Production Backbone and accessible, virtually instantaneously, to anyone involved in the project.

“The engineering really took care of Antoine and our team,” Winter says. “The whole support structure here at Sony was fantastic.”