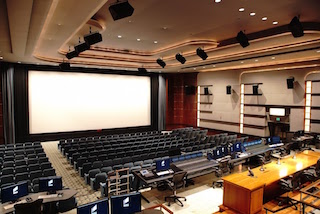 As part of the ongoing expansion of its sound resources, Sony Pictures Post Production Services has upgraded three mix stages on the Sony Pictures lot to support sound mixing for film and television in the immersive Dolby Atmos format. Among them is the 344-seat Cary Grant Theatre, the studio’s largest. Sony Pictures now has seven mix stages that support Dolby Atmos sound and plans to have nine within the next few years. The first project slated for an immersive mix in the upgraded theaters is Sony Pictures’ Spider-Man: Far from Home, which opens July 5.

The upgrades are part of Sony Pictures Post Production Services’ commitment to be the premiere source of entertainment sound services on the west coast. “Having our largest stage, Cary Grant, equipped for Atmos is a tremendous draw to filmmakers who want to work with our sound talent and appreciate the support we provide to creative artists,” said Kimberly Jimenez, executive director, post production services, Sony Pictures Entertainment.