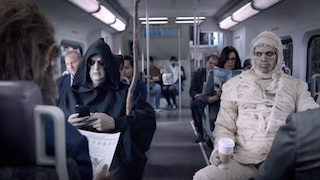 Death is not a good guy, he’ll take your soul for all eternity, but even he’s shocked by the kind of stuff that some satellite and phone companies pull on their customers. A new campaign conceived by independent creative marketing agency Something Different for Charter Communications to promote their Spectrum brand casts the black-cloaked merchant of death and other familiar demons, monsters and villains as regular Joes fed up with the really nasty evil practices at their telecommunications providers.

Four spots set to roll out over the next month center on gripes that provoke customer loathing like deceptive pricing, service interruptions and a lack of channels and features.

"We all just laughed at the idea of these evil people thinking someone else was horrible" said Something Different chief creative Tommy Henvey, “and it gave us a way to make our point that felt a little more unusual."

O Positive’s David Shane, who draws out the evil casts’ foibles and idiosyncrasies, directs the spots with a whimsical touch. In one, for example, a werewolf devotes his weekends to howling as a form of me time.

“It was fun to take tropey clichés of 30s and 40s movie monsters and dimensionalize them for the modern world,” explains Shane.  “We gave them everyday problems and below the surface emotions to create a sense of long-standing relationships between old friends, co-workers, wives and husbands.”

The campaign is Something Different’s first outing for Charter Communications. Henvey and executive producer Patti McConnell formed the agency last year as an alternative to traditional advertising agencies whose rigid structures can slow the creative process and get in the way of the work.

Something Different assembles creative, production and media planning teams on an assignment basis and tailored to the individual project. Henvey and McConnell believe the formula results in better creative, smoother process and less red tape.

McConnell credits Charter for its commitment to the new approach. “This is what we set out to do when we started the company,” she said. “We felt that there was a better, simpler way to make stuff and this campaign showed us that we weren’t actually out of our minds. We can bring in the most talented people, do big campaigns with great directors, and deliver great results. And, have a good time doing it!  That’s all we ever wanted.”