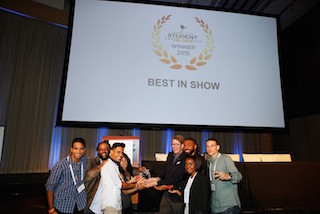 The Society of Motion Picture and Television Engineers and the Hollywood Professional Association today announced the Official Selections for the 2016 SMPTE-HPA Student Film Festival. Jurors curated the selected shorts from a record number of more than 250 submissions from more than 46 countries.

Hosted by SMPTE director of engineering and standards Howard Lukk, the SMPTE-HPA Student Film Festival will take place October 26, at the Egyptian Theatre in Hollywood, California. The event is being held in conjunction with the SMPTE 2016 Annual Technical Conference & Exhibition. The Official Selections will be presented in SMPTE Digital Cinema Package format, courtesy of Sundog Media Toolkit.

Filmmaker information and trailers are available at www.smpte.org/film-festival.

"We are thrilled with the entries for this year's festival, and we look forward to showcasing and supporting student filmmakers — including some still in high school — from around the world," said Lukk. "The Official Selections for this year's festival illustrate the rich potential of new entertainment technology as a storytelling tool, especially when in the hands of creative and innovative young filmmakers." Here are the 2016 SMPTE-HPA Student Film Festival Official Selections:

Best Use of Virtual Reality in Storytelling — Narrative Short