Slowing Down the Finish 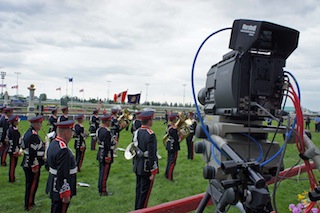 Kicking off the 2014 season of Canada’s Triple Crown of Thoroughbred Racing, Toronto’s Woodbine Racetrack hosted The Queen’s Plate Stakes last month. The event is the longest continuously run stakes race in North America, and this year marked its 155th anniversary. To ensure not a moment of horseracing action was missed, the production of the event included use of For-A’s FT-One 4K variable frame rate camera, used in conjunction with For-A’s ZE-One 4K extraction system.

“We used the FT-One to give us a slow-motion replay of the finish for our biggest race of the year, and the camera gave us exactly what we were looking for,” said Andrew Barnhardt, broadcast technical supervisor of the Woodbine Entertainment Group. “With the For-A's 4K extraction system, we could select the desired HD framing from the 4K raster to get exactly the shot we wanted.”

The ZE-One allows FT-One operators to frame and extract any 4K-image area of any scene for HD replays. The solution provides operators with an intuitive touch-screen interface, allows users to smoothly zoom in or out, and includes an embedded audio delay processor.

Capable of recording up to 900 frames per second, the FT-One was used with a Fujinon 85-300mm Cabrio lens (ZK3.5x85), and positioned near the finish line of the race to catch all of the action of the last run in super slow motion replay. Coverage of the horse race was shown on The Sports Network and footage from the FT-One at 420 fps was broadcasted within a minute of the finish of the race on July 6th.

"We cropped the race shot fairly wide, then used the ZE-One extraction system to provide a 200 to 300 percent zoom with full HD quality for playback,” said Andrew Alexander, vice president of For-A Canada, who helped with set-up and operation of the FT-One at the event. “We were also able to track zoomed shots on playback to create specific pan effects."

“I was confident that For-A would deliver for us on the day of the Plate, and fortunately that proved very true,” explained Barnhardt. “We've used For-A gear in our live production facilities for years, and their reliability is unmatched.”