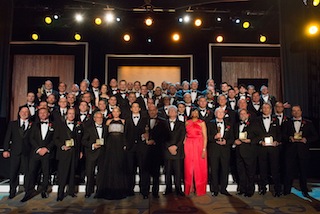 Six Society of Motion Picture and Television Engineers  members have been recognized with top awards — including two Oscars — from the Academy of Motion Picture Arts and Sciences. The Academy's Scientific and Technical Awards honor the men, women, and companies whose discoveries and innovations have contributed in significant, outstanding, and lasting ways to motion pictures.

SMPTE member Larry Hornbeck of SMPTE Bronze Sustaining Member Texas Instruments earned the Academy Award of Merit — an Oscar representing the highest Sci-Tech Award bestowed by the Academy — for his invention of digital micromirror technology, which is at the core of the TI DLP Cinema projectors that have become the industry standard. SMPTE member David W. Gray also earned an Oscar, the Gordon E. Sawyer Award, for technological contributions that have brought credit to the industry. Gray is vice president of global services and industry relations at Dolby Laboratories, a SMPTE Diamond Sustaining Member, where he has worked on cinema sound technologies ranging from stereo optical soundtracks to digital sound on film to Dolby Atmos.

SMPTE Fellow Steven Tiffen of SMPTE Bronze Sustaining Member The Tiffen Company was recognized along with colleague Michael Fecik. They received an Award of Commendation for their efforts in developing dye-based filters that reduce infrared contamination when neutral density filters are used with digital cameras. The optical filters resulting from this work have become a staple for professional cinematographers. 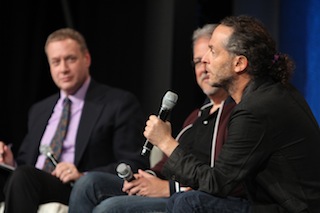 Scientific and Engineering Awards were given to SMPTE Fellow Iain Neil for the optical design of the Leica Summilux-C series of lenses and to SMPTE member Brad Walker and his colleagues at Texas Instruments for the design and refinement of TI DLP Cinema projection technology.

"SMPTE members have been at the forefront of digital cinema technologies, developing innovative solutions from camera to screen and speaker, and we are very proud of the six SMPTE members honored by the Academy for their groundbreaking work," said Barbara Lange, executive director at SMPTE. "We add our own congratulations to Larry, David, Steven, Iain, and Brad for their fine contributions to the motion-imaging industry."

The 2015 awards were presented February 7 at the Academy's Scientific and Technical Award ceremony at the Beverly Wilshire Hotel in Beverly Hills, California. An excerpt from the ceremony was included in the February 22 Oscar ceremony broadcast. During that broadcast, an Oscar was presented to Birdman cinematographer Emmanuel Lubezki (Chivo), who has been a friend of the Society since he took part in the 2014 NAB Show's Technology Summit on Cinema session on Gravity, produced in partnership with SMPTE. The award was his second Oscar, following his win for Gravity.