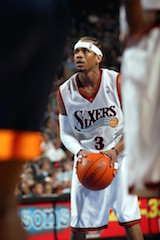 Preparation for post-production deliverables is often an overwhelming and tedious experience and producer/director Zatella Beatty’s feature length documentary about basketball star Allen Iverson’s rise to fame in the sports world was certainly no exception. Meeting Showtime’s tight deadline on delivery of Iverson wasn’t going to be easy.

Seven years in the making, Beatty was inspired to make Iverson after watching an interview with the Philadelphia 76ers all star several years ago at the height of his career.  “I believed that there was a far more interesting story to him than the simple news-byte version that was being offered by the traditional sports media,” said Beatty. She hopes audiences will gain the inspiration and courage after watching Iverson to reach for their own greatness, whatever it may be.

Having already been a long-term client of AlphaDogs Beatty once again called upon the team’s expertise in sorting out the plethora of specs required for final conform of the film using their Digital Service Station services.

A branch of Burbank based AlphaDogs Post Production, the Digital Service Station has been providing an alternative solution for delivering content in both an easy and affordable fashion since its inception in 2004 and it has become a valuable tool for independent content creators, saving considerable time and money.

“The Digital Service Station was our eleventh-hour hero,” said Beatty. “In the final hours before delivery we were still receiving last-minute versions of archival footage that had to be digitized, scaled up from SD to HD and converted from 29.97 to 23.98 fps. With the help of the Digital Service Station I was able to get the footage in record time and we were able to make our delivery date.”

Created by Terence Curren, president and CEO of AlphaDogs, the national network of  Digital Service Station branches works as a one-stop solution for capturing or transcoding camera source material into Avid, Final Cut or Adobe Premiere edit-ready media, with output to tape or drive, using the latest high quality HD and SD equipment. Quality assurance checks are performed with extreme diligence to ensure each project that goes out the door looks its absolute best and meets the required network specifications.

“I would definitely use the Digital Service Station again,” said Beatty.  “No matter what crazy deadlines or last-second revisions, AlphaDogs manager Paul DeCham and the rest of the AlphaDogs crew were able to deliver everything I needed using the Digital Service Stationservices. I had a great experience working with everyone and would absolutely recommend this service to people I know.”

Iverson made its World Premiere on Showtime in May as part of the Reality/Docs series and can be viewed on demand through December 30, 2015.