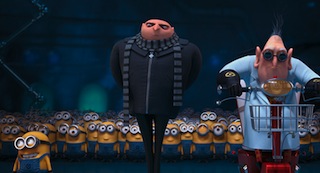 Paris-based animation studio Illumination Mac Guff used Shotgun software to keep on track for the 3D summer family film and one its most successful, Despicable Me 2. Flexible and scalable, Shotgun was first installed at the studio in 2007, and has become more deeply integrated into Illumination Mac Guff’s pipeline with each new project.

“The development cycle for any animated film can run up to four years, and managing our productions on Shotgun helps reduce this time by more than half,” explained Etienne Pecheux, supervising technical director, Illumination Mac Guff. “Shotgun also helps create a real synergy between artists, team leaders and producers. It centralizes all data, which eliminates discrepancies between production reports, and makes it easy to arrange reports any way we need, with different levels of detail depending on scope.”

For Despicable Me 2, Illumination Mac Guff worked with more than 400 artists, 50 team leaders, 25 managers and 30 technical crewmembers. Shotgun provided users instant access to critical project data in real time from any location. During production, each movie or frame sequence published on the internal asset manager was automatically transferred to Shotgun where the content could be viewed via Tweak Software’s RV playback and review system. Illumination Mac Guff also fed Shotgun statistics on render times, which helped detect abnormally long renders and anticipate a re-allocation of render power based on weekly quotas. Having leveraged Shotgun for Despicable Me (2010) and The Lorax (2012), Illumination Mac Guff has also developed about 20 custom Apps around Shotgun to date, from simple Linux line commands to a complex timesheet system.

“Shotgun is a very open production tracking system. Without it, we wouldn't have been able to track all we needed for three features films,” Pecheux said. “Moreover, we would have lost a tremendous amount of time gathering information for debriefing reports. Today, we have accurate statistics on almost any part of the pipeline, and can anticipate costs and durations very precisely. The simplicity of the API and the core engine behind the UI also make coding dedicated tools very easy.”

For each new feature film project, Illumination Mac Guff sets up a separate Shotgun database to control administrative settings and manage access and control of users at various levels of the production. Prior to deploying Shotgun, Illumination Mac Guff’s projects were managed with a smattering of homemade databases and Excel sheets.

“When Shotgun demoed at our studio, it was obvious that these guys came from production and faced the same problems we did, and that they found the proper answer to each question,” said Pecheux. “Shotgun stores data in a very simple set of tables and makes it easy to access data through a viewer that you can configure almost any way you like. For our studio, Shotgun made it possible to get global reports as well as detailed views. It definitely changed the way producers and artists work here.”

Shotgun CEO Don Parker said, “Collaborating with the team at Illumination Mac Guff has been incredible and inspiring. We’ve worked very closely with them for years in the evolution of their studio and pipeline, and watching their growth and astounding success has been a thrill. Shotgun is designed to alleviate production tedium and maximize efficiencies so when customers really harness its potential, that’s a big win in our book.”

Featuring the voices of Steve Carell, Kirstin Wiig and Russell Brand, Despicable Me 2 was released in theaters July 3 by Universal Pictures and Illumination Entertainment.