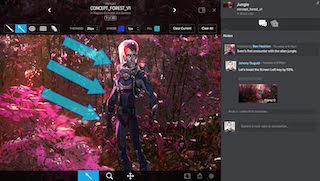 For visual effects artists in Vancouver, pros of all backgrounds and experience levels flock to the VanCG Meetup group for fostering a unified and supportive community. The non-profit organization, led by founder Nick Romick, offers popular monthly educational events, networking, and community-driven collaborative projects to let artists experiment with new techniques and tools outside the office. One such collaborative project currently in progress is Galactic Battles, a sci-fi short film featuring both live action and CG that pits the ships from beloved sci-fi franchises against each other in an all-out battle royale.

One of the main challenges for Romick on Galactic Battles was establishing an efficient pipeline for artists coming from all different studios, and working on this project primarily from home. Romick ultimately chose Shotgun for all production management and review on the project, allowing him to significantly consolidate the existing infrastructure and give artists the flexibility of a web-based tool.

“Shotgun was the perfect choice for our pipeline because it is the industry standard – no matter how the pipelines are structured at the various VFX facilities here in Vancouver, everyone is familiar with Shotgun,” explained Romick, who works by day as an artist at Method Studios’ Vancouver facility. “Plus with the range of experience levels in the VanCG Meetup group, Shotgun made it easy for seasoned artists to join the project, and the exposure to such a widely-used tool is beneficial for junior artists or students working as they build their résumés.”

Since implementing Shotgun, productivity and clarity on shot status on “Galactic Battles” quickly increased. “With no central network, we were keeping track of shots and assets through a combination of Google Docs and the VanCG Meetup forum,” said Romick. “Shotgun is unparalleled for task management – having one central database and being able to see updates in real time has made everything so much smoother. Shotgun will give us a huge advantage as the project moves forward, and will hopefully entice even more artists to join the fun.”

Romick plans to have a final cut of Galactic Battles on YouTube later this year.