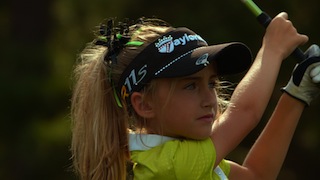 All documentaries come with a unique set of challenges and The Short Game about competitive junior golfers around the world presented several all its own. Director Josh Greenbaum and cinematographer J.B. Rutagarama said shooting with Canon’s C300 digital cinema camera helped solve them all.

The Short Game follows the lives of eight of the best 7-year old golfers in the world as they train for and compete in the World Championships of Junior Golf. The annual tournament held at golfing mecca Pinehurst, North Carolina, brings in 1500 young golfers from 54 different countries and determines who will be crowned golf’s next phenomenon. In its course, the eight stories entwine to form a fascinating and often funny portrait of a group of very young athletes and their families, in which the narrow-focused, peculiar and highly competitive junior golf subculture becomes both a window into contemporary global society and an inspiring reflection of the human condition.

Every year, the best 7-year-old golfers from around the world gather at the world famous Pinehurst Golf course in North Carolina to determine the next world champion and global superstar. The Short Game follows the lives of eight of the best 7-year-old golfers in the world as they train for and compete in the World Championships of Junior Golf.  In its course, the eight stories entwine to form a fascinating and often funny portrait of a group of very young athletes and their families, in which the narrow-focused, peculiar and highly competitive junior golf subculture becomes both a window into contemporary global society and an inspiring reflection of the human condition. 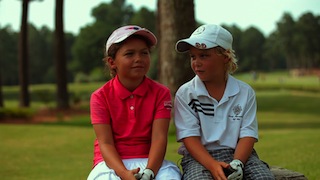 Greenbaum, a recent father of twin girls, said, "While I'm not a golfer, I've always been fascinated, and perhaps more importantly, incredibly entertained by kids this age. I find their unabashed confidence coupled with their innocent naiveté makes for a very funny combination of inspiration and unexpected wisdom.  And while the film may appear on the surface to be about kid golfers, it quickly becomes about much more.”

One of the first challenges the production presented was, that given the reality of filming in five countries Greenbaum could not shoot the entire movie with a single dedicated crew. “You want to stick with your same crew,” he said but it was simply impossible. In all Greenbaum used eleven cinematographers and for the final championship had nine DPs and nine camera operators, all shooting with C300s.

For that, each crew of two followed one kid around the course exclusively using mainly the 24-70mm lens and the 70-200mm. Before that final shoot, Greenbaum said, “We had a full-on orientation,” including a slide show. He said he was realistic about the results he was likely to get with such a large crew. The main challenge was to keep the look consistent. To add to the challenge, he said, “Half of our crew had never played golf. We shot what we could.”

One of the people new to the game of golf was the principal cinematographer J. B. Rutagarama. As a documentary filmmaker and Steadicam operator, Rutagarama is used to shooting in a run-and-gun style and found that the placid setting of a golf course offered a lot more control. This was cinematographer his first time shooting golf. He said he used Canon’s 70-200mm lens a lot and relied heavily on its four stops of image stabilization. Rutagarama said all that was helpful because he was doing a lot of handheld shooting and at six feet, three inches tall he is much taller than any of the young golfers. “We also played with a lot of wides,” he said, especially the 17-55mm lens. 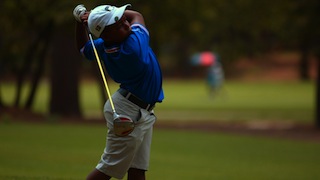 The relatively small size of the young golfers sometimes presented other challenges.  “We had to watch the framing, Rutagarama says. He says he had to work to find the right perspective and used trees as the background for many shots. “That gives [the kids] a sense of scale.”

Many people can get intimidated by being filmed but one advantage of assigning a crew to each kid was that it enabled the young golfer to develop a personal relationship with them and most of them soon relaxed. Greenbaum gives much of the credit for that the Canon C300. “It has such a small form factor.” On the other side of that spectrum were the kids “who felt that the cameras made them play better.” Anyone who has ever played golf can understand this because to succeed at the game you need to truly block out all distractions and focus on your play; it did not hurt that all these kids are champions.

Greenbaum said the shoot wrapped in August 2012 adding, “We finished our cut that winter.” He was happy that he was personally able to oversee the color-grading phase, especially given the large camera crew. Another challenge on a golf course is the bright sunlight and the fact that almost all golfers wear hats. “Shadows can be problematic especially in a documentary where the eyes are key to the story,’ Greenbaum said. “Thanks to the C300 we had the latitude to fill in the shadows.” Post-production was completed at Light Iron in Los Angeles.

Rutagarama was busy on another assignment and was not able to participate in the post process but both he and Greenbaum praised the C300’s Canon Log feature for smoothing the editing process. Rutagarama’s next projects included shooting a technology show for television and a feature film that is being shot in Puerto Rica.

Greenbaum is now in post-production on his newest project, a ten-episode series also shot with the C300. Called Behind the Mask, the series takes a closer look at the mascots for high school, college and professional sports teams, which is set to start in November.