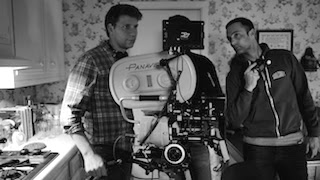 Cinematographer Adam Stone and director Jeff Nichols have been close collaborators since film school and share the same sensibilities, particularly with their preference for the anamorphic format. “Not knowing any better, we shot our first low-budget indie, Shotgun Stories (2007), in widescreen,” Stone said. “That film did better than expected, and we attributed some of its success to the format—widescreen added a weight and elegant stateliness to the story.”

The duo's budgets steadily increased with Take Shelter (2011) and then Mud (2012). With Mud, they jumped at the chance to work with Panavision. “Panavision was an icon to us,” he said. “Just saying we were shooting on Panavision made us grin and tremble in fear all at the same time. We knew we had to bring our A game to Mud, because we were about to shoot on some hallowed equipment.”

They applied lessons they learned shooting Mud on their most recent project: Midnight Special. On Mud, Stone discovered his go-to combination of small Panavision Millennium XL2 cameras paired with G Series lenses. “XL2s are ideal for any shooting configuration and, coupled with the lush G Series lenses, make everything look superb,” he says. “Jeff and I have stuck with the combination on Midnight Special and our latest, Loving, currently in post. We hope to continue this tradition well into the future.”

A road movie tinged with science fiction, Midnight Special is a simple story of a father's love for his son that is wrapped in complexity and nuance. In the film, Roy races through the South, with his son Alton who has supernatural powers but is dying, toward a secret destination where the key to saving his son’s life lies. But government agents and members of a religious sect in hot pursuit have other designs for Alton. The movie stars Michael Shannon, Joel Edgerton and Kirsten Dunst, with Adam Driver and Sam Shepard.

Stone said, “The complexities and nuances found in the G Series are not found in any other lens system. They are perfectly imperfect. They provide beautiful imagery without being overtly precise or clinical. The best word to describe the lenses is soulful, similar to an old Leica rangefinder or a really good wine.”

Stone worked out of Panavision Woodland Hills with senior vice president of marketing Dave Dodson. “He's a total rock star and has been a good friend since Mud,” Stone said. “Dave and the rest of the Panavision crew are tops in the business. I can honestly say Panavision is one of the classiest organizations I have ever encountered.”

Midnight Special was a small movie with a limited budget and a 60-day schedule shoehorned into 44 days. To make it work, Stone often ran three-camera coverage. “If a camera went down, we would be dead in the water and fall behind,” he said. “I’m happy to report all of the cameras worked swimmingly, and we never had any equipment issues. That’s kind of amazing considering the demands of the shoot. When we asked for two sets of G Series lenses, which are high-demand/high-dollar items, Dave did not hesitate to accommodate the request.”

Stone ran Kodak Vision3 500T 5219 through the Millennium XL cameras for night work and most daytime interiors. For daylight exteriors, he switched to Kodak Vision3 250D 5207. FotoKem handled developing duties. “The way we expose and process our film is pretty vanilla,” Stone said. “It’s all by the numbers and pretty mundane.”

No gimmicks or special processing—it's the filmmakers’ methodology that extends even to their aesthetic approach. “On all our films, including Midnight Special, Jeff and I like to be honest with camera placement and lighting,” he explained. “The camera is always someone’s point of view and the lighting is fairly minimal and true to the location. I know this seems straightforward but it’s a methodology that works for us.”

But the film, with its science-fiction element, does have its share of effects. After all, the boy with special powers has bright blue light emanating from his eyes. “After some testing, we realized the effect looked fake if it was purely CGI and needed to be practical and interactive to be believable,” said Stone.

For practical purposes, the boy wore small wire-frame glasses with powerful LEDs that allowed the actor to interact with the light and actually flare the lens. “To enhance the LED flare, we used Vantage Blue-Vision filters,” he said. “Once we captured the flares on celluloid, we shot the same sequence without the glasses, and with a little VFX wizardry, the two sequences were married together.”

Stone points out that Midnight Special has plenty of challenging shots and sequences. However, he admits that one of his favorites was neither challenging nor very technical and occurred on day one. “It was a simple Steadicam sequence where the camera follows three characters out of a motel room to an awaiting Chevelle,” he remembered. “We only had a few takes at the scene because we were shooting dusk-for-dusk with no lighting, and just as the sun dipped below the horizon, we started to roll. On the fourth take, the motel practicals bloomed, the sky turned inky blue, and crimson clouds dotted the sky. The actors and car looked amazing against that backdrop. It was an auspicious way to start principal photography and a beautiful way to end the first day of shooting.”