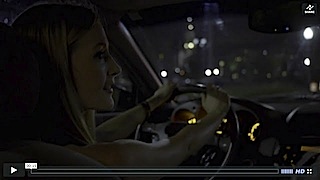 [Editor's Note: Jendra Jarnagin is a talented cinematographer who has a growing list of independent feature films and other projects to her credit. This article is from her blog and is published here unedited and with her permission.]

I recently wrapped the feature comedy A Bet's A Bet and the producers granted me permission to release this clip online, since it is so groundbreaking and there is so much interest in this camera right now.

I only had a small battery powered LED Litepanel inside the car, (the MicroPro) bounced against some muslin in the backseat to add a hint of consistent ambient fill, but it was intentionally three stops under exposed so you don't feel the source.  In other words, its barely doing anything (on purpose) and all the light you are seeing is streetlights and the lights from buildings.

Of course I spent more time scouting this scene (with my Canon 7D) than I did shooting it, to find the right streets for this is downtown Providence.  This scene also has another shot of Stephanie's boyfriend in the passenger seat as they carry on a conversation, and we did another scene the same way, with Mena Suvari and Geoff Stults in an SUV with tinted windows.

Also this was shot with the Optimo 15-40 zoom lens, which only opens to a T2.6. I don't feel any other camera is capable of giving me such a clean image with so little noise at this light level.

I hate the look of artificially lit night driving scenes, and this is exactly what I have always wanted to be able to achieve.