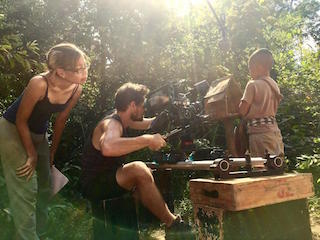 The Long Walk is the third feature film by director Mattie Do (Chanthaly, Dearest Sister), who was raised in Los Angeles but relocated to Laos to become the country’s first, and only, female filmmaker. In an interview in Women and Hollywood, Do described her genre-bending film as “an unconventional time-travel thriller set in a forgotten rural village in Laos, about the ethos of a man, plagued by regret and loneliness, and his downward spiral into becoming a serial killer. He also has a very complicit ghostly friend.” Cinematographer Matthew Macar shot the low-budget feature over 32 days in Vientiane, Laos with very little prep time.

In fact the opportunity to shoot The Long Walk was extremely unexpected after Do and her producers parted ways with the original DP after only five days of production. “I woke up to a text message from a friend and he asked if I wanted to shoot a movie in Laos next month,” he explains. “Six minutes later I get a call from one of the producers (Annick Mahnert) and she immediately starts grilling me – while I’m half-awake without any coffee – on why I shouldn’t do the project. ‘It’s low budget, not a lot of money, super-hot, strange bugs and there are elephants everywhere.’ I thought to myself, except for the elephants, this is basically Florida. I’m from there so I’m definitely used to that kind of environment.”

Macar received the script and admired its unique concept and interesting take on death and regret. After reading it, he realized his main challenge was not the budget but prep time. Macar was finishing up three back-to-back commercial shoots so besides email, he had no time to prepare with Do before arriving in Laos. “I was concerned about having shorthand and a language before we got to set,” he explains. “They allowed me to hire an assistant, Aaron Mager, and he really saved us when he agreed to come to Laos for little money.”

Because there wasn’t enough budget to secure a new camera rental package, Macar suggested to the producers to go with the Panasonic EVA1 since he had just shot a spec commercial with it and had previously shot on VariCam. He felt the EVA1’s smaller form factor, and more importantly the lightweight, would make handheld shooting easier, but also allow them to strip the camera down for gimbal use. “Laos is a really burgeoning film industry so aren't a lot of resources there,” explains Macar. “I pitched them on the idea of buying an EVA1 package and outfitting it with accessories and external monitors and batteries. It actually ended up being significantly more affordable than renting from someone else and now the production company in Vientiane own a really great camera package with all of the bells and whistles.”

To outfit the EVA1, Macar used a lot of accessories he purchased on Amazon from SmallRig, including a top and bottom plate. “On some of the parts that tend to break down the most, like rosettes and noga arms, SmallRig’s prices were at the point where I could order two or three as backups in case something went down,” he explains. 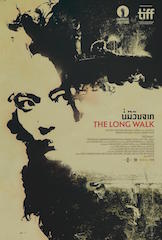 Macar also purchased a Zacuto Gratical HD EVF and an Atomos Shogun Inferno. “We were considering the RAW workflow but at the time it had just come out and we weren’t confident we could integrate the format into our post pipeline,” he explains. We wound up recording 4K ProRes files to the external recorder. If we were on a gimbal and running and gunning, we would record internally but for the most part we recorded ProRes. I come from the post-world and that’s a codec I’m familiar with and trust.”

The film was captured in 4K DCI (4096x2160) in V-Log at 23.98-fps with just a few over-cranked shots. Macar mainly used the EVA1’s LCD as a control interface with the camera. Instead of using the V709 LUT within the camera, Macar created his own custom LUT. “It was similar to the EVA1’s built-in Rec 709,” says Macar, “but Mattie is really particular about red and orange hues, so we wound up tweaking and rolling color values around. We didn’t have a D.I.T., or a color facility, so I was relying on my background as a sideline colorist to trust my scopes. Every day, I had our media manager pull a clip from each setup and give the files to me on a drive. That night I would load it up on my laptop and learn how the camera was performing in various situations.”

Macar knew his lighting package would be small so having an extra stop and a half to work with helped tremendously. According to the DP, the villages they shot in had murky blue/green fluorescent lighting that is common across Southeast Asia. “There’s the occasional mercury or sodium vapor overhead but for the most part they had these horrid tube lights everywhere so there was a lot of inconsistent color temperatures,” he says.

For daylight sequences, Macar shot at Native 800 ISO. For night exteriors where he would need to see in the distance, Macar would shoot 2500 Base and gain up or down as needed. “When we moved inside and where I had a little more control, I really liked dialing the ISO down from 2500 Base to 1600 because it gave me more detail in the shadows. It also cleaned up the image a little bit. That was our strategy for the most part, 1600 inside and 2500 outside. I think there were one or two moments where we had to push it up to like 3200 but I tried not to do that if I could avoid it. It performed really well. With the tools that we had it was the only way I could expose what we were trying to accomplish. It would have been nice if we had one of the VariCam models to shoot at 5000 ISO, but we were up against the wall in terms of budget and this did the trick for sure.” 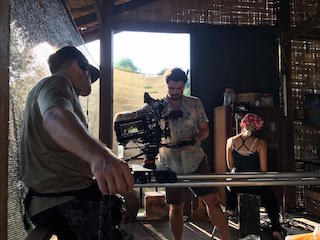 According to Macar, the daytime shots they captured with the EVA1 were stunning. “We shot some stuff at high noon with a little bit of fill, but it holds up as good as any camera I’ve shot with on a larger budget,” he reveals. “With just the right little bit of tweaking here and there in the curve, it’s a great looking image. It has the right information that you can roll over or up with and it looks really great.”

Shooting a wide night shot with very little ambient light was a big concern for Macar. Working with his crew, he found a nice way to throw soft high angle light into scenes by rigging DS 1 lights to a single stand bouncing off a beadboard that was clamped to the same stand. “We had turtle base C-stands and we loaded those stands without the base on top of combos and then cranked those all the way up,” he explains. “We were able to get soft light 25 – 30 feet in the air. The most surprising scene that we shot was the first time we did that. I looked through the viewfinder and I thought this looks exactly like what I saw. That was really encouraging with everyone coming together to solve a problem.”

With his low budget, Macar employed his own collection of vintage Nikons AI and AIS Nikkor prime lenses – from an 18mm to a 135mm. Macar created his own cine-mods by adding gears and 77mm step up rings for focus and filtration and felt the lenses were ideal in capturing the imperfect world they were portraying. “The majority of the film was shot on the 28mm or the 50mm and they do some interesting things,” he explains. “I love the way that they bloom just slightly with the highlights and they capture great skin tones.”

In terms of shooting an entire feature in Laos with a new compact cinema camera, Macar was all in. “You just have to figure it out and try and make something great with the tools you have,” he reveals. “That was my upbringing and I think this is the perfect camera for people that have that ambition. It’s an incredible tool if you’re able to embrace it for what it is because it can make some beautiful stuff. The fact that we got what we got with what we had is just such a compliment to everybody on the team. I’m really excited to see what people think about the film.”