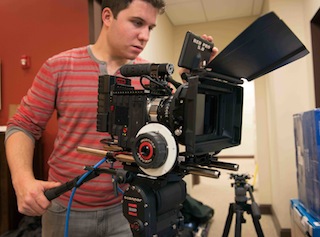 While filming his second commercial spot for the upscale fast-food Southeast-based company, Backyard Burger, Jon Chema faced both a tight budget and the challenge of wrangling a real live untrained cow. “When I saw the storyboards,” he says. “I saw that we would be shooting at the top of an overlook as morning fog rolled in and the sun rose on our location outside of Nashville. I realized the cow wasn’t going to stand still, so I had to have a set-up that was steady and mobile at the same time.”

“That’s why OConnor’s 1030D, O-Box, O-Grips and Follow Focus supporting our Red Epic with Zeiss Super Speed lenses was simply a must,” he adds. “I love how fluid OConnor heads are — the 1030D system is the best of both worlds for me. It’s super light and still retains the fluidity in the pan and tilt that OConnor is known for.  OConnor brings strength and structure with its heavy tripod and head. Using standard and baby sticks and a large camera package, you can become everything but mobile. But, this shoot soon became a game of; the cow moving, my gaffer wheeling around the 4K HMI, my AC quickly picking up the camera, our PA hazing the background, and us rolling as much footage as we could. It was quite humorous to watch and our client probably thought we were all crazy.”

Chema says that the 1030D sticks, which he used to cover his “talent,” were lightweight and easy to use. “The Follow Focus has a great feel to it,” he adds. “I love the rubberized knob and so did my AC. A lot of times, with lower budget projects that I shoot, I have to pull my own focus. I really like the feel of the OConnor Follow Focus and think that it’s comparable to units that are much more expensive.

“The O-Box is incredible as well,” he adds. “For the money, it’s the best mattebox out there. It’s lightweight and easy to use and the ability to use it with the OConnor O-Grips on lighter rigs is cool. This was the perfect combination for our shoot. Loosening a huge tripod head and moving the camera, then the head, then the sticks would have been out of the question. Being able to pick up the entire rig and reposition it quickly was a must.

“Also, the fluidity became very important for the product photography later,” he adds. “We were shooting everything on 50 and 100mm macro lenses, so the slightest movements were amplified. I’m convinced that I couldn’t have achieved the fluidity both in focus and camera movement had it not been for this OConnor set up.”

Nashville, Tennessee-based director/DP and photographer Chema shoots music videos and corporate commercials for clients including Cee Lo Green, Saturday Night Live, Simon & Schuster, and others. His current regional spot for Backyard Burger is in post and will soon be airing in the Southeast United States, and can also be found online through Vimeo http://vimeo.com/63347300.