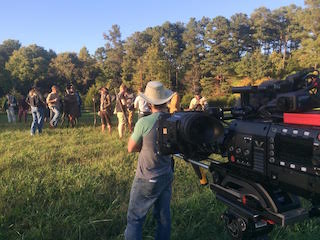 Warm Springs made the investment in the gear to cover an exceptionally large-scale, six-month production that will involve more than 600 actors on locations throughout the United States; the 12-episode season of Legends and Lies, executive produced by Fox News host Bill O'Reilly, will debut in spring 2016.

Warm Springs Productions has long made Panasonic P2 the company's preferred acquisition format, shooting History's highly-rated Mountain Men and HGTV's Log Cabin Living, among many other series, specials and pilots, with a variety of P2 HD 2/3-inch shoulder-mounts, with P2 HD handhelds as B cameras and for specialty shooting.

“We have just been waiting for a camera with the cinematic handling of the VariCam 35,” said Warm Springs president Chris Richardson, who shares the executive producer credit on Legend and Lies. “And when we saw the demonstration of its dual native 800/5000 ISOs, the low-light shooting blew our hair back. On our very first day on location, we were shooting in an alley while it was getting dark; we were still only at 800 ISO and the footage looked amazing.”

While the first season of Legend and Lies focused on heroes of the Wild West, the second season will profile the patriots of the American Revolution. “The VariCam 35 is a perfect fit to authentically replicate the minimal lighting, the living by candlelight, of the 1770s,” he added.

Richardson has outfitted the VariCam 35s with Fujinon 19-90mm Cabrio and 85-300 super 35 zoom lenses, and is shooting the Fox series in 2K, 12-bit 4:4:4. “That gives us a lot of information and the leeway of 14+ stops in post,” he said. “We've had amazing experience with Panasonic cameras since the beginning of our company, and we wanted to shoot Legends and Lies in P2—we're deeply familiar with the workflow.”

“The VariCam 35 is so focused on post-production, an especially important criterion for us as we handle post for all our shows,” Richardson continued. “The ability to record proxies alongside the 2K master is very helpful.”

Richardson explained that the production is always shooting with the two VariCam 35s, one for the tight shot, the second for the wide shot. “We try to get as much as possible on our first and second takes, but this is a docudrama, and we need to shoot a lot. We know that the VariCam 35 will give this second season of Legends and Lies an epic, beautiful, cinematic look.”

Richardson said that over time Warm Springs intends to deploy the VariCam 35's 4K recording capabilities across the full range of the company's productions, including the creation of 4K graphics for Legends and Lies.