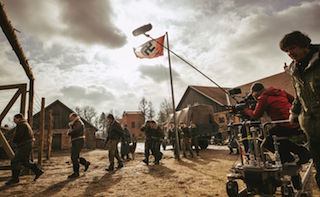 Instrument of War is a period piece based on the true story of Clair Cline, a US Army Air Forces pilot shot down over occupied Holland during World War II and held at the German Stalag Luft 1 POW camp, and The Prison Camp Violin he made from materials found in the camp and by trading Red Cross cigarettes for a bow. “We shot in Lithuania for the authenticity of the architecture, and built the POW camp around existing buildings to enhance the film’s production value,” said cinematographer Wes Johnson. With the authentic look of their sets, and a strong U.S. dollar, Instrument of War looks like it was shot for several times its actual production cost.

“The weather in Lithuania can be challenging, with a Baltic winter where you can get sleet, rain, hail, fog, and clear skies all in one day,” noted Johnson. “Those elements were also a blessing, giving us the realism of the POW’s miserable experience. Bad weather makes for great photography. It can be rough on equipment, but our set of Cooke 5/i prime lenses not only stood up to the challenge, it helped us get shots that we wouldn’t have been able to capture with most other lenses.” 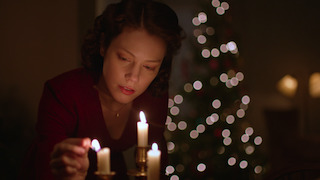 One of those shots was an interior lit by a single candle, the perfect situation for the Cooke 5/i range that all feature T1.4-T22 speeds. “It adds to the authenticity of the story, but I could only do that with a T/1.4,” said Johnson. “Knowing that I could go there with the Alexa XT with a Cooke 5/I, wide open, was amazing - it’s the lens at its most vulnerable state. It’s just naked. And it’s the most beautiful image I’ve ever seen in a spherical lens.”

Johnson’s kit included seven of the eight 5/i prime lenses (18-100mm) plus a color-matched S4/i 14mm for extra tight spaces where Johnson needed a wider lens.

When shooting something that has to read as realistic, everything on the set needs to register. That’s where the T1.4 speed of the Cooke 5/i primes can really add to a film. “At T1.4, I could light up a quarter-mile of landscape with one 18K light, and still have a stop to play with. The effect we achieved felt like a natural night look, not a movie night look,” continued Johnson. 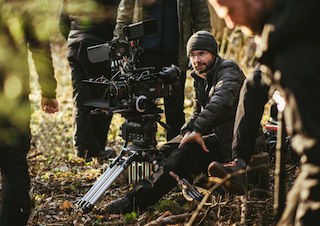 Johnson has been a fan of Cooke lenses for a decade, as an AFI Alumnus and having worked as a professional cinematographer for the past six years. “After you’ve worked with other lenses, when you put a Cooke on the camera, there’s instantly a quality you can’t articulate,” said Johnson. “You immediately feel like you’re back on celluloid, it just knocks the digital edge off the sensor — that subtlety, that’s just so hard to describe. You don’t need diffusion to bring back that natural film look, it’s built into Cooke lenses out of the box.”

It was this confidence in Cooke lenses that gave Johnson the conviction to rent the 5/i primes in Lithuania, even though he had never used that model before. “The 5/i was among the options I had, and I knew it had the characteristics and the speed I needed for low light exteriors and interiors,” he said. “Sometimes there’s nowhere else to go when you run out of light – even with the high ISOs of modern digital cameras. – but when you can open from 2 to 1.4 and double your light, it can be a life-saver. That stop saved my hide more than a few times.”

On Christmas Eve, 1944, Cline played The Prison Camp Violin for the other POWs, and its story goes on from there. When the camp was liberated in 1945, Cline took his violin back home. Since then, The Prison Camp Violin has been heard in concert halls across the United States. In 1995, he donated it to Intrepid Sea-Air-Space Museum in New York City, where it was played by Glenn Dicterow of the New York Philharmonic during a ceremony aboard the aircraft carrier.

Instrument of War was produced by Kaleidoscope Pictures of Provo, Utah. It is currently in post-production with a U.S. release date of November 23.