Shooting Fast and Light on the Campaign Trail 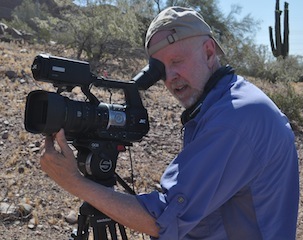 Documentarian Bill Fenster — based in Phoenix, Arizona — is currently chasing Arizona gubernatorial candidate Fred DuVal around the state for a new documentary. Fenster has relied on Sachtler fluid heads and tripods throughout his career and this shoot is no exception because he needs to travel fast and light.

“I’m doing it by myself. I’ve got the camera, batteries, microphones, a light and a few other things,” he said. “With [a Sachtler] Ace M set of sticks, I can just throw them over my shoulder and carry them by the strap.”

When he first put a Sachtler Ace M to work in the summer of 2013, Fenster was more than familiar with Sachtler’s signature operational feel that the new, small tripod system would have to live up to. Though the tripod system is less than three feet long when stowed, the two-stage legs take the camera above the crowd when the tripod is fully extended.

“It was quite a challenge, keeping the quality of Sachtler with the much miniaturized size,” he said. “You wouldn’t believe this thing — it has Sachtler’s immaculate movement, as all Sachtler tripods do. But this thing, you can practically put it in your back pocket.”

The Ace M’s 0 to 8.8 pound payload range easily handles the camera packages Fenster mounts on them, “even when I’ve made them a bit heavier. I’ve never had to use the full five steps of counterbalance available.”

Fenster said that a tripod is really put to the test when he’s shooting long telephoto shots or close-up detail on subjects like documents. “I used to rely on a much larger tripod system for these shots because of the stability, but the Ace M is sturdy enough for long lens shots — even in a wind.”

When shooting close-up work, like a slow pan across a document, Fenster is looking for the ability to start and stop a smooth pan without any backlash. “With the Ace, I’m able to move across the page — or whatever I’m shooting — and then when I stop and let go of the pan handle, the tripod just freezes in position.”

Fenster said that the more he uses his Ace M, the more he has learned about what it can do. “I was in a big crowd the other day — at a political rally with all these people. I just collapsed the legs on the Ace and used it as a monopod. It’s light enough so that you don’t have to throw it over your shoulder, you can just pick it up an inch off the ground to move, and then plop it down. For somebody like me who’s doing mostly one-man-band stuff, it’s going to extend my career.”