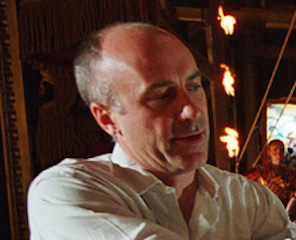 Two-time Oscar nominee John Mathieson BSC (Gladiator, The Phantom of the Opera, Robin Hood, 47 Ronin) recently completed work on The Man from U.N.C.L.E., an update of the stylish 1960s television series of the same name. Mathieson says that he would have preferred to shoot film, but that the demise of some of the major film laboratories in the U.K. made it impossible. He did shoot a little bit of 16mm film on a wind-up Bolex (processed at Bucks Laboratories) for the opening of the film, to bridge some archival footage from the period with the main storyline. In some ways, the colors and textures of the period production design lent themselves to digital, he says.

The new film is an action-comedy in which Napoleon Solo (Henry Cavill) and Illya Kurykin (Armie Hammer) work to foil an atomic plot.

Regarding the film’s aesthetic, Mathieson says, “It’s definitely got that British invasion, early Bond sensibility – 60s pop art, a lot of plastic and polyester. Low-end technology, but good, futuristic ideals, and a good sense of design. The colors are very bold and synthetic, with E-type Jaguars and A-frame dresses. This film is kind of comic-strip. At times we even split the frame. It’s slightly quirky.”

“Now that the Codex is internal, in the camera where it should be, you don’t have the extra lump to carry around with you,” Mathieson says. “I know my crew – the ACs and the DIT – liked it. I’m more interested, of course, in the sensor. Frankly, I don’t care how it gets down the line, as long as it works.” 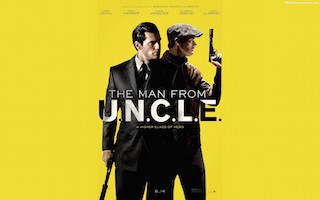 “Things were so boldly graphic, and slightly hyper-real at that time, so I rolled with it,” Mathieson says of the decision to shoot digital. “It’s quite ‘up’ and colorful. I applied myself to the job. It’s an echo of those times. I certainly tipped my hat to the painters – Warhol and Lichtenstein – and filmmakers of that time.”

Fittingly for this Cold War-era tale, the optimistic and opulent tones of the West are contrasted by drab dinginess in the Soviet-dominated East. Meanwhile, Solo and Kurykin bicker about the relative merits of decadent capitalism and communism. Later, the scene changes to 1960s Rome, another playground for Oliver Scholl’s production design and Mathieson’s frame.

The aspect ratio was 2.40:1. The digital sensor made it easy for Mathieson to work with a wide range of lenses, including E-series Panavision anamorphics, anamorphic zooms, longer spherical zooms, and a Technovision conversion of an older Cooke lens that delivered lots of flares and blooming. Zooming within shots was considered part of the 60s flavor, as was a bit of vignetting at the edges, which was reasonably consistent in the longer focal lengths. Whatever the lens, the final image maintained the 2.40 frame.

The Man from U.N.C.L.E. would require a workflow that would accommodate multiple sources, formats, and resolutions. Giardiello’s charge was to provide maximum image quality without unduly burdening the filmmakers, and to move toward a common color space for the accurate development of the look of the movie. The color pipeline and workflow was based on a “classic” 10-bit RGB Log-C to P3/709 conversion, plus custom integration. 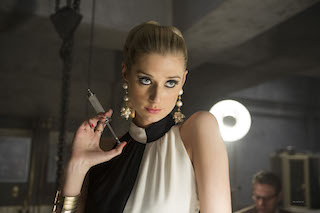 “I needed to create a workflow able to accommodate both flat and scope image formats, and a range of cameras,” says Giardiello. “We had to be able to put cameras everywhere, and overcrank if needed. This included aerial shots, underwater shots, body/car/bike rigs, etc., all running together. That meant a multitude of different color/data pipelines that, without this workflow, we would have had to match and change on a shot by shot basis, every day.

“Since John decided to go with the Alexa/ArriRaw as main camera/recording format, we chose the Alexa M as the option for the aerial units, and the GoPro Hero 3 for some very specific ‘hidden camera’ action shots,” he says. “Then, for a couple of situations, we added a Canon 5D because we needed a small underwater camera setup with which we could still mount ’proper’ lenses. In other situations, a Canon C500 with a Codex S recorder was used.”

Working with the Technicolor color science department and Paul Ensby, Mathieson’s longtime colorist, the team generated a color pipeline which was mainly based on the following three elements: an input LUT, when needed, for non-LOG-C sources; an ASC-CDL (color decision list), to define the look; and an output LUT, to better define look and the overall density and to establish the gamma/color space. Standard ASC-CDL values that Giardiello generated on set shot by shot were introduced into the pipeline and baked into the dailies, and later used in VFX and for the DI as a starting reference.

“We used a live, one-light grading system based on ASC-CDL values that allowed John to define his look from the set in a very accurate, but simple, way,” Giardiello says. “It allowed John to fully convey his artistic intentions to the director and producers immediately, on-set. He could trust that the dailies would be as he intended without having to spend additional time after a long day of work, and he could build his cinematography using the on-set grading as an additional tool, as he would a light, a gel filter, a flag or camera movement. It’s a harmony that has been created not just to make things quicker, but to make them better.” 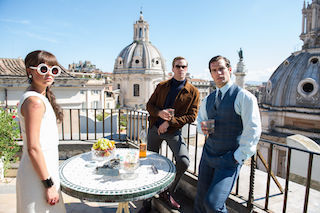 Giardiello has used Codex on every job for the past five years. “Codex has always guaranteed me a solid, fundamental and unrivalled instrument for my job,” says Giardiello. “Capturing ArriRaw on Codex allowed us even more flexibility on The Man from U.N.C.L.E. Through Codex we customized and integrated different pipelines. We created an extremely solid and reliable color pipeline, and also it allowed us to add our custom Camera Format metadata field that defined how the many input sources would to be handled in post, smoothing out the various procedures needed to conform the movie.”

The DI was done at Technicolor in London with Ensby. “Paul has a light touch,” says Mathieson. “He’s got a very sensitive eye, and he doesn’t go to extremes, pulling thing apart. I feel that when you do a DI, it should be like a piece of music, with rhythm. If you noodle with every shot, you’ll destroy all the caricature and imperfection in it, and it becomes normal. Imperfections give you your look as a DP. The danger of the moment is that’s there so much photography that looks the same. So much CGI work goes in, which has a certain look.

“There’s an expression: imperfection is the essence of music,” he says. “You did what you thought was right on the set, at three o’clock in the morning. It might not be great but it was bold and it was instinctive and you were there at the time. It had a feel. Stay with that. I feel that’s a better way to go, and I enjoy that more.”

Mathieson is currently shooting Knights of the Roundtable: King Arthur with Ritchie using Codex recording and media. Giardiello is the DIT. Mathieson credits Codex with bringing some order to the chaos in digital filmmaking workflows.

“With film, we had a universal standard that worked,” Mathieson says. “With digital, there have been a lot of people driving wedges between us. It’s really alarming when things bounce all over the place. Codex said, ‘Enough of this nonsense.’ What we need is a common language. Codex has come forward as a standard, whichever camera you’re on.”