Shooting B&W for a Timeless Feeling 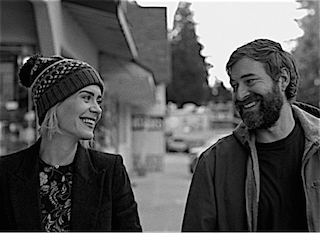 As soon as DP/director Alex Lehmann got the go-ahead to shoot Blue Jay, his first feature film, he immediately knew he wanted to shoot it in black and white, and he knew what camera he was going to use. He’d tested the new Canon ME20F-SH multi-purpose camera for a horror film he was set to shoot, but which never got made. He felt the camera was ideal for Blue Jay because it satisfied several concerns: it works in extremely low light, was affordable and is simple to operate. Shooting in black and white was a creative choice. “We were going for a timeless feeling,” Lehmann said.

He knew that everyone involved needed to believe in the concept. And they did. “We were committed to black and white,” he said. “I think we had to commit to it all the way.”

Blue Jay tells the story of former high-school sweethearts Jim (Mark Duplass) and Amanda (Sarah Paulson) who have been out of touch for more than 20 years. By sheer coincidence, they run into each other at a grocery store back in their alpine hometown of Crestline, California. Jim's mother has died and he's here to put her house on the market. Amanda is visiting her pregnant sister. They get to talking, first over coffee, then over beer and jellybeans. Before they know it they're at Jim's mother's house, where everything sends them spiraling back into the past. Jim and Amanda's lives have taken different directions, yet here they are, reconnecting like nothing has changed.

Lehmann credits writer/actor/producer Duplass with convincing such an accomplished actress as Paulson (Carol, 12 Years a Slave) to play the part of Amanda. Lehmann also knows his film is likely going to benefit from the widespread acclaim that Paulson got for her Emmy-winning performance as Marcia Clark in the FX Networks series The People vs. O.J. Simpson: American Crime Story. But he and Lehmann both admired Paulson for her prior body of work and cast her before that series began. They started shooting Blue Jay after the first two episodes aired.

The film made its debut at the Toronto International Film Festival where it was widely praised by critics. The Orchard acquired all worldwide theatrical and ancillary rights to Blue Jay romantic drama and plans a theatrical awards-qualifying release on October 7 followed by a digital release October 11. The film will stream later this year on Netflix and is the first to be produced under that company’s four-film deal with filmmaker brothers Jay and Mark Duplass.

Lehmann said he tested several cameras in preparation to shoot the horror film that didn’t happen but the Canon stood out to him. “I knew that using it would not sink our budget and I also wanted to simplify my technology.”

Lehmann shot with Canon Cine primes and zooms. “We recorded in color and previewed in black and white,” he said. The camera’s low-light capabilities enabled Lehmann to greatly reduce the size and complexity of his lighting kit. For example, he didn’t need a generator.

Another example: he said he’s always loved the quality of light of the garden lights around his own patio table and he ended up lighting much of the film with just those. “With this camera it was easy to control the lighting.”

Many directors go into a film with a specific visual roadmap. Sometimes, at least in their mind, they’re referencing a painting or another film. I asked Lehmann what were his visual cues going into Blue Jay?

“There's definitely some early Jarmusch in there,” he said, “and a lot of it was just referencing classic black and white films when movies could take their time and hold on a static frame longer. In my teens I was really into Bogie and Grant, and those movies are simple by today's standards, but some are done better than others.”

He said almost half of the film was shot in daylight and was pleased with the results. “I loved it,” he said. “We tested the camera for daylight and wouldn't have shot with it if it meant compromising our look for half of the movie.” 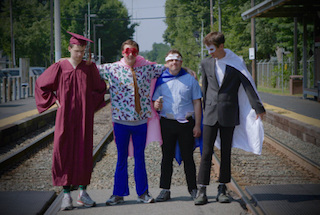 True to independent filmmaking, everyone on the crew wore several hats. “I was the DP and operated at times,” Lehmann said. “Nate Miller, a very talented cinematographer, kindly did some second unit DP’ing for us and operated with me on set. Our focus puller Erin Naifeh also hopped on a second camera sometimes so I could stay at the monitor.”

Lehmann said Chris Donlon, who was also the film's editor, served as DIT on the set. “He and I created some LUTs and I'd monitor with them on set,” Lehmann said. “Those same LUTs went right into his computer; we kept it simple.”

Simplicity was the word for their approach to the dailies as well. “We [Lehmann and Donlon] were both staying in the same house while in Crestline so the workflow consisted mostly of ‘Who's gonna make the coffee today?’ and we'd sit at his computer.”

Some directors simply hand off their film to an editor; others are more hands on. I asked Lehmann how involved he was with the final cut. “Chris turned around a first cut for us really quickly. After that I worked with him pretty consistently but we would always bounce our ideas off of the entire creative team. I had really smart producers and was always excited to hear their notes” Lehmann gave special credit to Mel Eslyn, Xan Aranda, and Sydney Fleischmann.

They took the film to Fotokem for color/conform.

Lehmann’s next project, which he was shooting all summer, is a follow-up film to his highly acclaimed documentary, Aspberger’s Are Us, which Netflix acquired at this year’s SXSW. That film, which marked Lehmann’s debut as a director, follows the Boston comedy troupe that gives the film its title. It was also produced by Duplass Brothers Productions.