Shedding Light on an Affair 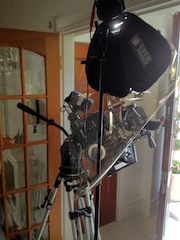 During the filming, DP Chris Moon used HMI lights with daylight conversion filters for the general lighting set up. However, for particular locations with limited space, notably scenes shot in a bedroom and a treatment room, gaffer Matthew Riley suggested smaller Litepanels LED Fresnels should be used. One benefit of the cool-running LEDs was they prevented the small set from becoming uncomfortably hot.

The daylight balanced Sola ENG provides controllability and single-shadow properties inherent in a Fresnel light, but uses just a fraction of the power of conventional fixtures. Like all Litepanels fixtures, Sola Fresnels feature smooth dimming from 100 per cent to 0 with no noticeable color shift, and offer beam control of 50º to 15º.

Gaffer Matthew Riley said, “We tried out the Litepanels Sola ENGs and one of the greatest benefits in using these heads was being able to match the daylight fixtures easily, and gel them up the same.”

The Sola ENG fixtures have been designed for on-camera or stand mounting, providing manual focus and dimming control via camera-like ergonomic controls. Output from the LED fixture is fully flicker-free, and remains consistent even as the battery voltage goes down.

Riley continued: “We mainly used the head as an eye light, and to back light some smoke on a few shots. We discovered that a Sola ENG, full spot, dimmed right down and with the soft box on, created a beautiful quality eye light. It provided a slightly larger source, with a soft drop off around the edges. On a couple of occasions we even used it to give us our key against daylight in tight spaces.

“The Sola ENG fixture opened up a number of creative options on the shoot. We were really impressed with the quality of the flood and the spot, and the amount of punch the fixture had, like a lightweight pocket par. One outstanding feature is that the dimmer is integrated into the head, we actually used this for a gag in a shot as a door opening. It’s a very handy little kit, and perfectly transportable as it all fits into a Pelican 1510 carrying case.”

The Sola ENG Flight Kits are ideal for news and professional videography, designed for on-camera and portable use. Each kit weighs just 30 pounds so it can be easily transported and includes three Sola ENG LED Fresnel fixtures with a range of accessories including three stands, a softbox, power supplies, gels, barndoors and mounting accessories.

The Other Woman was presented in the short film corner at this year’s Cannes film festival.