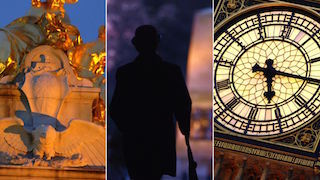 Editor Brian Sepanik of The Colonie recently crafted an open for the London Business School’s 2015 TEDx Conference that challenges the viewer to see the familiar in new and unexpected ways.  Beauty, Shape, Examine, the translation of the Greek root words of Kaleidoscope, inspired My Sister Fred’s thought-provoking concept for the video and Sepanik’s approach to bringing home its message. The agency tasked The Colonie with taking the post-production for the project from creative editorial, motion graphic design and color grading through finishing.

“The challenge was to forgo conventional representations of Beauty, Shape and Examine, and present these elements from unexpected viewpoints,” says Sepanik. “A number of two and three panel split screens, reminiscent of Greek Diptychs and Triptychs, were used to represent these three aspects of Kaleidoscope, the event’s theme.

The two-minute open observes and illustrates a constantly changing sequence of elements – from a neon sign and pattern of a chain-link fence to the faces of a grandmother and grandchild. Throughout the montage the images hone in on small details in patterns, shapes and colors, providing a skewed perspective that reveals beauty that often goes unnoticed.

“My Sister Fred’s creative directors, Claudine Lormé and Mary Sylvester, worked out dozens of possible combinations of images,” says Sepanik. “We took those combos and vibed off of the frames they created, using some and switching around others. After the video has been roughed out, we focused on determining which images related and worked best together in each split screen. Claudine and Mary gave me a lot of freedom to create the technique and shape the storyline.”

“The video was completely a collaborative process,” says Sylvester. “The idea was shaped by everyone’s contribution. We created the overall concept and structure, and then briefed the filmmakers to shoot their own interpretation of the words Beauty, Shape, Examine inspired by the environment around them. We had no idea what content we would receive, so the editorial process needed to allow for spontaneity. We were fortunate to have a client that trusted us, and a creative partner who could work with us this way.”

“Brian was the perfect partner for this improvised creative process,” says Lormé “He understood our vision and could quickly evolve the visual story with us as new footage came in. He chose the music for the video, which was absolutely key to set the pace and overall mood. This was the kind of project that could only work well with a experienced, senior editor leading a great team.”

Because The Colonie was working with elements from multiple sources, its colorist, Lauren Malis, spent considerable time color grading the piece to achieve a cohesive tone and feel. The Chicago-based company’s senior motion graphics designer, Jennifer Moody designed a series of 16 title cards for the event’s speakers. Moody used the colorful facets from the identity created by My Sister Fred to create end titles for the open, which flip the words Beauty, Shape Examine to become the Greek words Kalos. Eidos and Skopeo, and then blends them together to form the word Kaleidoscope. Using the theme mark, the TEDx logo is revealed through the windows of the figurative kaleidoscope.

Steven Aguilar and Jordan Stalling of Particle Audio created sound effects to punctuate and add depth to Moody’s motion graphics. All of the designs were created using Adobe Creative Cloud and the editing, color grading and finishing were completed in Avid Media Composer 8.3.

My Sister Fred created all of the materials for The London Business School event, from the 2015 theme identity to opening video to the website, event banners, signage, collateral, swag and social media.