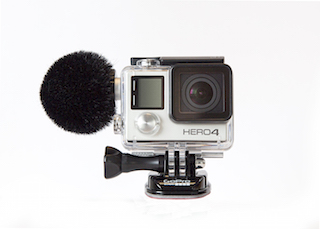 Sennheiser has unveiled an action camera microphone that will allow GoPro users to match the breathtaking footage they capture at the extremes with high-quality audio.

“Achieving uncompromising sound quality for extreme sports footage has always been a challenge, and more often than not, extreme athletes had to tone down their expectations regarding audio quality,” said Kai Lange, Sennheiser’s product manager, broadcast and media. “Our forthcoming action microphone will solve these audio issues and allow users to create compelling videos.”

Developed within the framework of the GoPro Developer Program, the forthcoming action camera microphone is based on a professional Sennheiser miniature microphone that features an internal protective diaphragm, a so-called Umbrella Diaphragm, which is located above the acoustically active membrane.

A newly developed windshield makes the mic waterproof and nearly immune against snow, ice, and wind. As a result, the company says it will be able take on virtually anything the elements can throw at it, enhancing GoPro footage with high-quality audio even during extreme sports activities such as surfing, climbing or mountain biking.

“We use a special foam material for the windshield, which ensures that the mic can even be used for water sports while fully retaining its wind protection properties,” said Lange. “A classic hairy windshield or a classic foam windshield could not do the job – if they get wet, there will be no protection whatsoever against wind noise. We have taken on this challenge with an innovative new design.”

Currently, the windshield is in the later stages of development. The company plans to release it in March 2017.