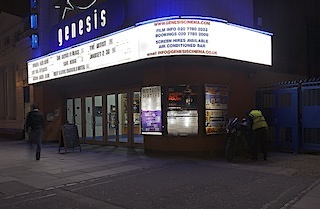 The Event Cinema Association has announced the line up for its second annual conference, taking place October 16 at the recently restored independent cinema, the Genesis in Mile End, East London. Featuring two panel discussions concerning marketing event cinema and a focus on new business models and technology, the conference also has a unique new format, a total of six break out sessions taking place over the course of the day. Sponsors of the conference include DSAT Cinema, LANsat, Rentrak, Philips, DCM and Audience Entertainment.

Melissa Cogavin, managing director of the ECA said, “Last year’s conference was a sell-out event, attended by 180 delegates from 19 countries worldwide, and we were delighted by the demand, emphasizing the need for such an event at a key time in the sector’s growth. We listened to feedback afterwards and felt that given the diverse nature of the audience, comprising all manner of business backgrounds, it’s impossible to make every topic on the stage relevant to everyone. The creation of break out sessions means the delegates can choose subjects that interest them particularly and meet with like-minded people. Ultimately it’s better value for the money, especially given the distances some will be travelling.”

Mark Walukevich, board director of the ECA and senior vice president of international film at National Amusements added, “The ECA conference is the only event of its kind in the world. As such it’s the go-to place for anyone involved in the event cinema industry, or anyone who wants to find out about it. Many more international delegates will be attending this year as the ECA’s reach expands overseas to include not only Europe, North and South America but Asia as well.”

“In such a growth area, the relationships we have with distributors, content providers and our technical partners are absolutely key,” said John Travers, board director of the ECA and manager of event cinema for Cineworld Cinemas. “We recognize how important these networking opportunities are for everyone associated with this relatively new business. Hence for our second conference, we’ve been keen to offer plenty more networking opportunities both throughout the day and into the evening with a drinks reception.”

Speakers from the UK, US, Canada, France, Poland and Germany among others are due to take the stage during the course of the day. The break out sessions will tackle subjects rarely given serious attention, but which are essential to event cinema, such as Production and Financing, Rights Acquisition, Practicalities in Live Delivery and Utilizing the Intermission to Generate Revenue. Attendance at the break out sessions will be on a first come-first served basis.

The event cinema industry has grown in stature considerably since the last event in October 2013, with successes such as BBC Worldwide’s Dr Who: Day of the Doctor which saw cinemas gross $10 million in three days worldwide; the ongoing Back to the Future Secret Cinema event in London, Andre Rieu’s 10th Anniversary Concert, Matisse Live; and the continuing box office smashes by National Theatre Live such as War Horse.  The growth in box office attendance will see many providers walk away with a few gongs at the Second Annual ECA Awards, which will also take place on October 16 at the conference.  Categories such as Best Box Office, Excellence in Programming and Excellence in Exhibition offer all those involved in event cinema the chance to see their work in this field recognized. Nominations are due in early September with voting by members due shortly afterwards.

Tickets and regular program, sponsor and speaker updates are available at http://www.eventcinemaassociation.org/