ScreenX, the multi-projection system that provides a 270-degree panoramic film viewing experience within a theatre setting, reported today a successful 2017 for the company from strong attendance results to a number of key expansion milestones.

The company says it has more than doubled its number of worldwide locations to 128 screens as of this month. The company plans to continue its global expansion in the coming year.

Since making its CinemaCon debut in 2015, ScreenX has successfully screened feature films, from action and adventure to horror and animation, while quickly growing its footprint. In 2017, ScreenX broadened its global market share, adding new locations and expanding into new markets.

Also in 2017, 10 titles were screened in ScreenX – more than double the number from 2015 – including first time tent-pole films from major Hollywood studios in the premium format: The Great Wall (Universal Pictures International), King Arthur: The Legend of the Sword (Warner Bros. Pictures), Pirates of the Caribbean: Dead Men Tell No Tales (Walt Disney Studios), and Kingsman: The Golden Circle (20th Century Fox). 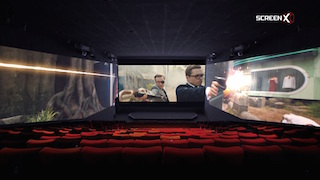 Tom Molter, executive vice president, international distribution at Warner Bros. Pictures, said, “We are always looking for new ways to engage audiences, and projecting films in 270-degrees and on three walls in the theatre is a great way to add a new level of excitement to upcoming releases.”

Andrew Cripps, 20th Century Fox, president of international distribution said, “We are delighted with the recent success of Kingsman: The Golden Circle in ScreenX, and we look forward to showcasing more titles in the innovative format in the years to come.”

Among the highlights for those Hollywood titles was Kingsman: The Golden Circle, which recorded an average 48.5 percent occupancy rate during its opening week.

The successful attendance rates have also led many partners and members of the press to publicly praise the format and the overall experience it provides film viewers. Kingsman: The Golden Circle’s Taron Egerton said of the format that it allows viewers to “feel the excitement and immersiveness of the cinema.”

“This year, we made significant progress with Hollywood studios that led to an exciting lineup as well as global expansion opportunities,” said Byung Hwan Choi, CEO of CJ 4DPlex. “Moving forward, we will accelerate the pace of our growth to increase our reach around the world, as well as expand our film lineup even further.”