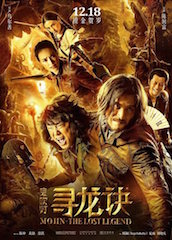 ScreenX, the multi-projection system that allows moviegoers to go beyond the frame of the movie screen by extending the images onto the theatre walls, is opening its second site in the U.S. in Las Vegas in February. After launching the first publicly available theatre at the CGV Cinemas Los Angeles earlier this month, ScreenX is set to open its second screen at the AMC Town Square 18 in Las Vegas. For the second feature film to be shown in this unique format on American soil, ScreenX will feature Mojin: The Lost Legend. Already breaking records in China, Mojin is a science fiction tale following the adventure of a retired tomb raider pulled back into his old profession.

“Mojin is the perfect film for residents of Las Vegas to experience ScreenX’s innovative and immersive 270-degree format for the first time,” said Paul Kim, director of content, ScreenX.  “We are thrilled that together with AMC we are able to bring ScreenX to another location in the United States.”

Created by South Korean company CJ group – which previously introduced 4DX around the world – ScreenX is the next evolution in theatre technology.  It immerses the audience into a 270-degree viewing environment that utilizes three sides of the theatre to express more of the story and provide a panoramic experience.

Since debuting in 2012, ScreenX has quickly grown its Asian business, currently operating more than 78 screens in 47 locations in South Korea as well as screens in China and Bangkok. It was showcased exclusively for industry attendees of CinemaCon 2015, also at AMC Town Square 18 in Las Vegas.